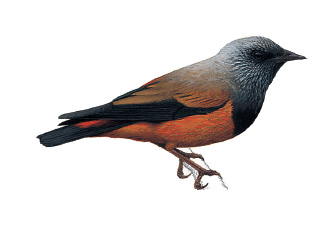 Although it was once well known to the natives of Hawaii, by the time that Europeans began their ornithological exploration of the island, this species has virtually disappeared. The striking red, black and silver Ula-ai-Hawane is known from just five specimens, two in New York (one of which is either an immature or a female, and shows a greenish plumage), one in Cambridge (Massachusetts), one in Honolulu and one in Tring. The first of these was taken by an amateur naturalist and shopkeeper by the name of Mills about the year 1859. The last was collected from Mount Kohala in 1892. Probably the species became extinct soon after this date, although the experienced and reliable Hawaiian ornithologist George C. Munro reckoned he might have glimpsed an individual as late as 1937.

Quite clearly, this is one of those Hawaiian species that stood at the brink of extinction even as it was being discovered to science. Native Hawaiian knowledge of the species indicated that it was once widely distributed on the island of Hawaii, although it was only ever seen close to the hawane palm.