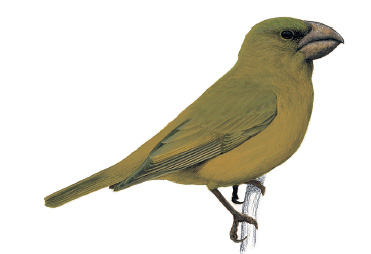 The Hawaiian honeycreepers form one of the most striking illustrations of adaptive radiation, but, unfortunately, so many of them are extinct that the example is now historical rather than living. At some point in prehistory an ancestral honeycreeper stock somehow arrived at the Hawaiian Islands and found a situation that was ripe for exploitation. Due to the remoteness of the islands there were many ecological niches that were not successfully occupied. The ancestors of the honeycreepers adapted accordingly and lifestyles were adopted that would in more normal circumstances be the prerogative of other kinds of birds. Thus, there are honeycreepers that came to resemble finches, some that developed almost parrot-like bills, still others that acquired long, slender, down-curved beaks useful for probing, and yet others with more general all-purpose beaks.

This fascinating diversity has been horribly diminished by the process of extinction. The Kona Grosbeak was a perfect example of the way in which the ancestral honeycreepers adapted. It had evolved a short and incredibly powerful bill that enabled it to exploit food types that more normally developed birds could not. Indeed, the sounds of hard seeds and nuts being split by the awesome bill of this species betrayed its presence to field collectors. This is another bird that was best described by R. C. L. Perkins (1903). He wrote: It is a dull, sluggish bird, and very silent – its whole existence may be summed up in the words “to eat”. Its food consists of seeds of the aaka, and as these are very minute, its whole time seems to be taken up in cracking the extremely hard shells…Its beak is nearly always dirty, with a brown substance adherent to it, which must be derived from the sandal nuts.

The species was discovered on the slopes of the famous volcano Mauna Loa in the Kona district of Hawaii during 1887. It was seen again several times during the next few years, but the last sighting occurred in 1894 and it is assumed that these birds became extinct soon after that date.