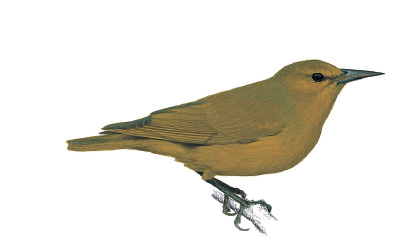 The Greater Amakihi, a rather non-descript little honeycreeper coloured olive green, was discovered by the world of ornithology during 1892 when Rothschild’s collector Henry Palmer took four specimens. In December 1895 a few individuals were collected, and the species was located again during 1900. The following year it was found once more, since which time it has never been seen again.

By the time of its ornithological discovery the species was restricted to a very small part of the island of Hawaii, the dripping rainforest to either side of the Wailuku River at elevations of 300-900 m. Whenever it was seen, this species was observed creeping along the branches of ohia trees or in the foliage. Individuals ate insects and their grubs and other invertebrates. They were also seen to feed on the nectar of the ohia flower. The habitat that this species occupied is long gone and the area is now covered with sugar cane.