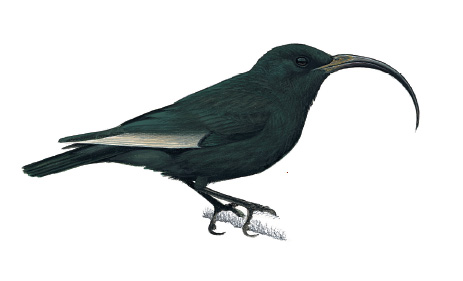 A bird very closely related to the Hawaii Mamo once lived on the island of Molokai. Here it was discovered by R. C. L. Perkins at an altitude of 1525 metres during June 1893. What is known of the species comes largely from Perkins’s account. Individuals were only ever seen low down in the underbrush. Dangerously, for a creature that spent its time close to the ground, the birds were rather tame, and Perkins found it easy to observe them at close quarters. He believed that they fed exclusively on nectar, and he wrote:

I saw three adult males of this bird in one low bush passing from flower to flower and spending only a few seconds over each…Even those flowers which were at a height of no more than a foot from the ground were carefully explored. The crown of the head of each of these birds was plentifully encrusted…with the sticky white or purplish-white pollen of the lobelias and gave them a singular appearance…they will sit quietly preening their feathers when they have a very comical appearance, much stretching of the neck being necessary to enable them to reach the fore parts of the body with the tip of their long beaks.

Following Perkins’s discovery of the species, it was found on several more occasions, but was last seen in June 1907. There is no real chance that it could have survived as the habitat in which it lived has been virtually destroyed.