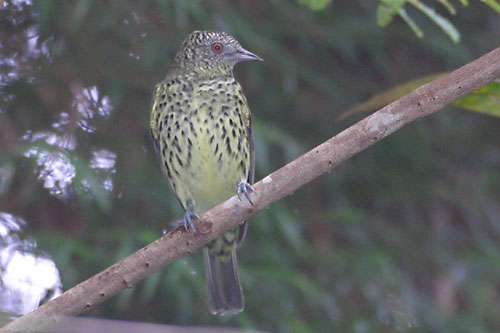 It features are its sharply pointed bill, the orange-reddish iris, the scaling on the head and neck and the black spots on the underparts. It has a red or yellow crest which is normally flattened and hidden

Listen to the sound of Sharpbill

The Sharpbill is found in a series of disjunct areas from Costa Rica to south-east Brazil and including the tepuis of southern Venezuela and the Guianas, Amapa, eastern Para, and various spots on the eastern slopes of the Andes.

Sharpbills are most commonly found in tall dense forests but occasionally venture to the forest edge.

The nest of the Sharpbill is built by the female and is a small cup built on a slender branch made out of moss and spidercop and glued together with saliva. Clutch size is two eggs, incubated by female in shifts of about 30 minutes, being absent for about 8 minutes. Incubation period varies from 14 to 24 days. Chicks are fed by regurgitation, once an hour shortly after hatching, becoming two feeds an hour at later stages. The chicks fledge after about 28 days.

Their diet consists of primarily of fruit, but they will also take insects, hanging upside down in from twigs to obtain insect larvae. They will also travel in mixed-species feeding flocks with ovenbirds, tanagers, woodpeckers and cotingas.