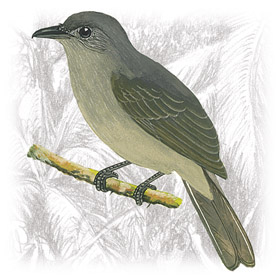 It is a large bird looking a bit like a thrush but perches in a much more upright position. It is plain grey with a mottled effect on the throat and breast. Although it can be often heard singing, it is very difficult to spot, it is considered the noisiest bird in the Amazon..

Listen to the sound of Screaming Piha

Its natural habitat is subtropical or tropical moist lowland forests. It is found in middle and lower levels of humid forest and woodland. It is common in tall forests, terra firme as well as varzea.

Males of the species, like male hermit hummingbirds, are known engage in lekking behavior during mating season. The males gather in grouips up to 40 meter from eachother and attrack females by loud calls while jerking their head. The nest is a loose twig structure built on a small branch of a tree about 5-10 meter above ground.

It lives alone but sometimes follows mixed-species flocks. It eats mainly fruit but also some insects, the latter being caught in the air by short sallies.

This species has a large range, with an estimated global extent of occurrence of 7,100,000 kmÂ². The global population size has not been quantified, but it is believed to be large as the species is described as ‘common’ in at least parts of its range (Stotz et al. 1996). Global population trends have not been quantified, but the species is not believed to approach the thresholds for the population decline criterion of the IUCN Red List (i.e., declining more than 30% in ten years or three generations). For these reasons, the species is evaluated as Least Concern.