Source to all birds on the Planet
admin
Cotingidae, Latin America, Passeriformes
Comments 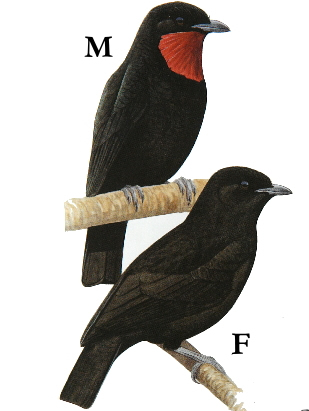 It is a stout medium sized glossy-black bird. Males have a large purple-red upper throat patch, (similar to the gorget of the hummingbirds), extending to the side of the neck. It has a short wide pointed grayish bill, black eyes, and gray legs.

Listen to the sound of Purple-throated Fruitcrow

Lives in small groups during breeding season, all individuals wuill tend to the one nest. Nest is an untidy cup of small twigs, lined with even smaller twigs. Clutch size is one egg incubated for about 25 days. Young are fed by several group members and fledge after about one month.

Forages in small groups for fruit, by looking for a strong branch and plucking; insects are taken by perching and short sallies to glean prey from foliage.

This species has a large range, with an estimated global extent of occurrence of 5,700,000 kmÂ². The global population size has not been quantified, but it is believed to be large as the species is described as ‘frequent’ in at least parts of its range (Stotz et al. 1996). Global population trends have not been quantified, but the species is not believed to approach the thresholds for the population decline criterion of the IUCN Red List (i.e., declining more than 30% in ten years or three generations). For these reasons, the species is evaluated as Least Concern.

Sedentary throughout range with some local movement.