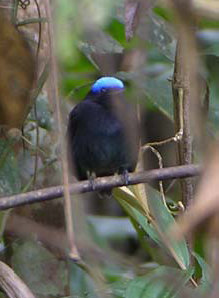 Male black above with a white band on rump. Underparts brown bu with white on belly. Female has white tufted flanks.

Listen to the sound of Dusky Purpletuft

It is found in Brazil, French Guiana, Guyana, Suriname, and Venezuela.