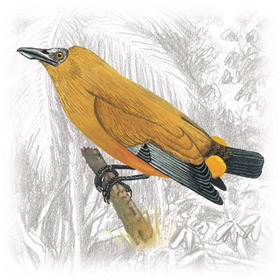 Crown and sided of the head are bare and darkk bkue-grey. The nape and the upper mantle cinnamon-brown becoming more reddish brown on the lower back. Wings are blackm wing coverts brown and the under wing coverts white. Tail black, throat and upper breast cinnamon-brown, rest of under parts chestnut rufous. Sexes are alike with upper mandible black and lower grey.

Listen to the sound of Capuchinbird

It is found in Brazil, Colombia, French Guiana, Guyana, Suriname, and Venezuela.

The Capuchin bird forms leks around a dominant male and his subordinates trying to occupy the dominant male’s perch. They are very loud during their display and the noise has been compared with the mooing of a cow. Nest is a small open cup made out of twigs. It is usually built 3-6 meter above ground in understorey tree. Clutch size is one egg incubatedsfor about 26-27 days.

Forages in the forest understorey and low level brachnes for fruit. Takes this by pervhing and eating or plucking wit hshort sallies. Also hunts large insects, taken by short flights through the foliage and gleaning prey from leafs.