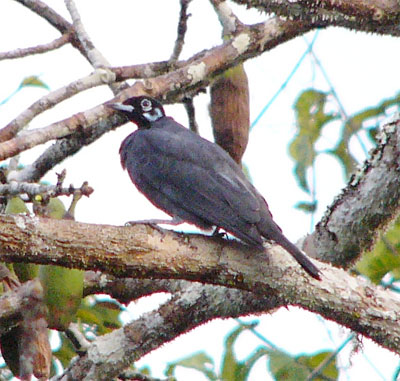 The male is mainly blue-black with silver-grey wings. It gets its name from the blue bare skin on its neck which is all crinkled and folded. The eyering is also bare and blue. The female lacks the grey wings and has much less bare skin on the head.

The nest is a small cup made out of lichens and lined with fungus placed about 8 meter above ground. Clutch size is one egg.

Forages for fruit by perching and picking food, also feeds on large insects like grasshoopers and dragonflies. These are hunted by wing and (unlike onther cotinga’s) by foot. This species will run actively on branches chasing prey.

This species has a large range, with an estimated global extent of occurrence of 5,300,000 kmÂ². The global population size has not been quantified, but it is believed to be large as the species is described as ‘frequent’ in at least parts of its range (Stotz et al. 1996). Global population trends have not been quantified, but the species is not believed to approach the thresholds for the population decline criterion of the IUCN Red List (i.e., declining more than 30% in ten years or three generations). For these reasons, the species is evaluated as Least Concern.

Moves regularly in high flying flocks, it is unknown if these movements are just local or part of a migratory pattern.