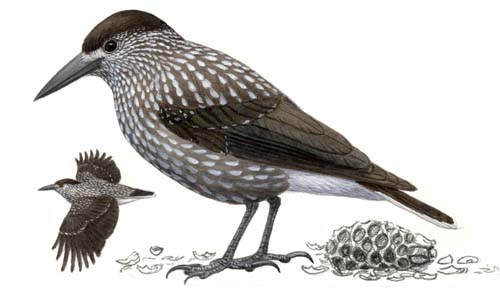 Rather small, long-billed, compact, and short-tailed corvid, with (uniquely in Corvidae) pale-spotted face and body and bold white vent and tail-rim all obvious against otherwise dark chocolate-brown plumage.
Unmistakable, with white-black-white bands under tail conspicuous from below or behind even at distances where pale spotting on body becomes invisible. Sharp-billed, short-tailed silhouette quickly apparent as distinct from that of Jay. Flight recalls Jay but rather more steady, with flapping, not so jerky wing-beats used during both level and undulating progress. Gait essentially a hop varied by sidling jumps and occasional bounces. Sociable, even gregarious during eruptions during which birds often become tame.

Listen to the sound of Spotted Nutcracker

Breeds in boreal or montane upper and middle latitudes of west Palearctic in cool continental forest low-lands and on mountains up to treeline, wherever essential requirements of coniferous forest and food are fulfilled. At home on ground as well as in trees. Within west Palearctic, resorts mainly to stands of Norway spruce in northern taiga zone or preferably Arolla pine in mountains, but sometimes larch or silver fir. Where Arolla pine absent, alternative reliance on storage for winter of hazel nuts renders access to these of vital importance, even if this involves repeated flights of several km; in Sweden at least, this factor is apparently indispensable.

Almost always in conifer, generally against trunk. Nest: compact, well-made structure containing 3-5 distinct layers providing good insulation; outer foundation of twigs generally of conifer (often green), though sometimes of other species such as birch, beech, or bramble, with roots, grass, and lichen, inside which layer of compressed beard-lichen c. 3 cm thick, then layer of fragments of decayed wood and moss c. 8 cm thick, followed by some earth mixed with various fibres, etc., and lastly lining of grass, rootlets, lichen and hair rarely feathers.
Clutch size 3-4 ragning from 2-5. Incubation period is
about 18 days and the young fledge in 23-26 days.

Main food consists of conifer seeds, or nuts, of trees in the pine and spruce families. Larger birds eat the hard-shelled hazel nuts. Spotted nutcrackers get the edible meat inside the shell by hitting the shell with their bill.

Spotted nutcrackers have thick bills that they use to open nuts. They place the nut between their feet and then begin pecking on the shell. Nutcrackers use their beaks to hit the nut until the shell cracks.

Like other corvids, nutcrackers store food. They bury nuts and seeds to eat at a later time. If no seeds or nuts can be found, nutcrackers eat insects and berries.

Western race (nominate caryocatactes) and most Asian races chiefly resident, with weak invasions occasionally reported; Siberian race (macrorhynchos) eruptive migrant. Eruptive (diurnal) migration of Siberian race associated with failure of pine seed crop, especially Siberian stone pine. Migration exceptional in that little or no return movement occurs in following spring, most birds failing to survive, though a few breed in wintering areas in subsequent year(s); some return towards area of origin a few weeks after emigrating, however. Eruptions reach Britain, southern France, and northern Italy in exceptional years. Coastlines act as leading lines, and expanses of water as barriers. Recent invasions of western Europe in 1968 (after which breeding colonies established in Belgium), 1971, 1977 (after which birds bred in Finland and Sweden), 1985, and notably 1995.