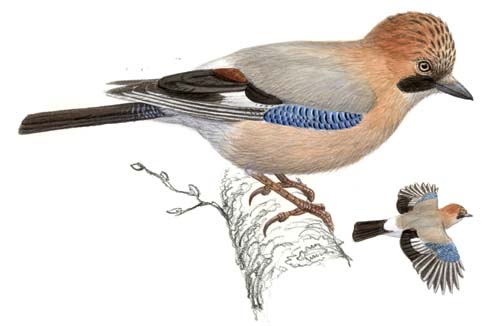 Listen to the sound of Jay

Breeds across wooded middle and lower middle latitudes of west Palearctic, mainly in continental temperate and Mediterranean climates, but marginally in oceanic, boreal, and wooded steppe zones. predominantly lowland, but in Carpathians to treeline at 1600 m.
Strongly arboreal and at home in fairly dense cover of trees, scrub, and woody undergrowth, especially in woodlands of oak, beech, and hornbeam, but also inhabits other broad-leaved and, in parts of range, coniferous forests. In some regions has spread into smaller outlying woodlands, spinneys, and copses, and even to urban and rural parkland, and to large gardens, where sometimes uses walls and stone ledges.

Mid April to early June in Britain, end of April to early June in Finland, mid April to end of May in Switzerland, early April in North Africa.
Nest site in fork or on branch of tree or bush, often thorny, usually close to ro against trunk in middle of lower crown, or high in crown of young tree or of conifer.
The nest is a rough foundation of twigs, with inside layer of soft, thinner twigs, roots, stalks, etc., lined with rootlets, bast, grass, moss, leaves, hair, and rarely feathers. Clutch size varies from 5-7 eggs, Incubation lasts for 16-18 days and is done by female only.

Invertebrates, especially beetles and Lepidoptera larve, fruits and seeds, especially acorns. Small vertebrates occasionally taken, most often in winter or when feeding young, also carrion and domestic scraps.
During breeding season most food collected from leaves of trees, mainly caterpillars in oak, but otherwise forages principally on ground except when collecting acorns in autumn for storing.

Sedentary in west and south of range; mainly eruptive migrant in east and north, but small numbers move every year in extreme north. Eruptive (diurnal) migration of north and central European populations probably chiefly due to failure of acorn crop; notable years have included 1955, 1977, and 1983. Populations involved and extent of movement vary greatly. Heading usually ranges between west and SSW, with strong westerly component for eastern (Russian) birds. Most migrants are juveniles, and considerable proportion returns to area of origin in spring.
Autumn movement mid- or late September to early or mid-November, spring movement (in smaller numbers than autumn) March-June, thus continuing markedly late, when breeding season well under way. Birds are reluctant to cross sea; thus, passage migrants rare on Helgoland (Germany) and Ottenby (
← Previous Post
Next Post →