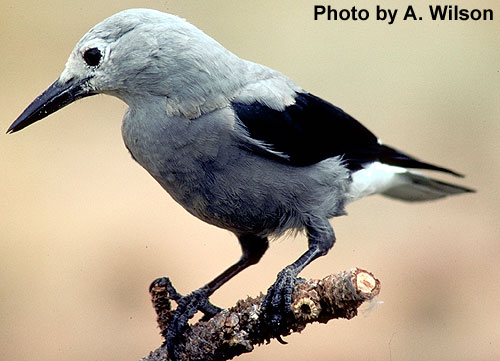 Built like a small crow, with a light gray body and large white patches
in its black wings and tail. If these patches are seen, it should be confused with no other bird of the high mountains. Tame birds can often be fed by hand.

Listen to the sound of Clarks Nutcracker

High mountains, conifers near treeline. Generally breeds at high elevations in the mountains, in open or broken forest of pine, spruce, or Douglas-fir. May also breed in lower-elevation pine or
pinyon-juniper woods when there is a good cone crop. Wanders to above treeline in summer, and may move to lower elevation woods in fall.

Breeding activity often begins in late winter, when territory is still snow-covered. Courtship may involve long flights, male following female.
Nest: Site is in coniferous tree, usually away from trunk on horizontal limb, 8-
40′ above the ground. Nest (built by both sexes) is large and deep; has a platform of twigs and bark fibers supporting a cup of grass, bark strips, pine needles.
Eggs: 2-4, sometimes up to 6. Pale green, lightly spotted with brown and gray. Incubation is by both parents, about 16-18 days. Incubating adult sits tightly on nest even when closely approached.
Young: Both parents care for and feed young. Food for nestlings often consists of pine seeds stored the preceding autumn. Young leave the nest about 18-21 days after hatching.

Omnivorous. Much of diet is pine seeds; remainder of diet quite varied, including other seeds, nuts, berries, insects, snails, eggs and young of other birds, carrion.
Behavior: Forages on ground and in trees. Will pry open pine cones to extract seeds. Harvests pine seeds in late summer and fall, carrying up to 90 at once in throat pouch to bury them in soi
l on exposed slopes; may store 30,000 or more seeds in one season. Is able to find these caches later, feeding on them through winter.

Southwestern Canada, western United States to northern Mexico. Migration: Movements are complex and variable. O
ften a permanent resident, but may move to lower elevations in mountains in fall, even out into lowlands, perhaps in years when food crops are poor in the mountains.