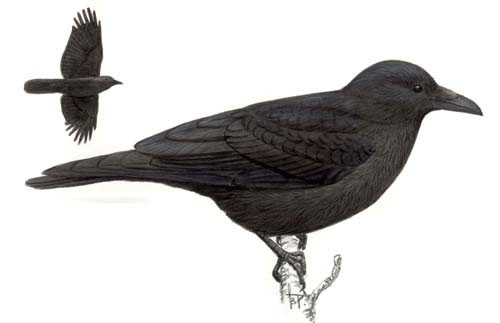 Large, quite powerful, heavy-billed crow, either all black or with contrasting grey back and underbody. Lacks any grace or attractive feature, unlike other similar common west Palearctic crows, and does not show loose thigh feathers Rook. Sexes similar, little seasonal variation but wide range of intergradation between black and hooded birds in Britain, N Europe, and Mediterranean region.

Listen to the sound of Carrion Crow

Breeds in west Palearctic from sub-arcticand boreal through temperate to Mediterranean, steppe, and desert zones, up to 1000 m, often moorland above 300 m, and is much more often found nesting on rocks, cliff ledges, and even on banks or islands on ground among heather. In Low Countries, breeds in parks and woodlands intersected by fields or clearings, but also in many polders and wooded dunes, or along lines of trees bordering water channels.

Breeding starts Mid March to end of May in Britain, mid April to mid May in Finland, mid January to late April in Israel.
Nest site, high in tree at woodland edge, in small stand, or isolated, also on pylon or telephone pole, more rarely on cliff, rock, building, or ground, if no high trees or pylons available.
Nest, rigid but elastic construction typically in 4 layers. Foundation of stout, short twigs mostly snapped off trees and bushes, sometimes with leaves, held together by layer of turf and moss, which is followed by smaller twigs, stalks, roots, and commonly runners of couch grass, then lining of bast, bark strips, grass, wool, feathers, etc., and much soft man-made material. 3-6 eggs, short sub-elliptical to long oval, smooth and glossy. From light blue to green with very variable speckles, spots, blotches, and scrawls of olive-green to blackish-brown, sometimes obscuring ground color, often concentrated at broad end. Incubation lasts 18-19 days, by female only.

This species has an extremely large range, and hence does not approach the thresholds for Vulnerable under the range size criterion (Extent of Occurrence <20,000 km2 combined with a declining or fluctuating range size, habitat extent/quality, or population size and a small number of locations or severe fragmentation). Despite the fact that the population trend appears to be decreasing, the decline is not believed to be sufficiently rapid to approach the thresholds for Vulnerable under the population trend criterion (>30% decline over ten years or three generations). The population size is extremely large, and hence does not approach the thresholds for Vulnerable under the population size criterion (<10,000 mature individuals with a continuing decline estimated to be >10% in ten years or three generations, or with a specified population structure). For these reasons the species is evaluated as Least Concern.
Corvus corone is a widespread breeder across most of Europe, which accounts for less than half of its global breeding range. Its European breeding population is very large (>7,000,000 pairs), and underwent a large increase between 1970-1990. Although the species declined in a number of countries during 1990-2000, these declines were set against stable or increasing trends in other key populations, such as those in the United Kingdom and Turkey. Despite the lack of recent trend data from Russia, the species was stable overall