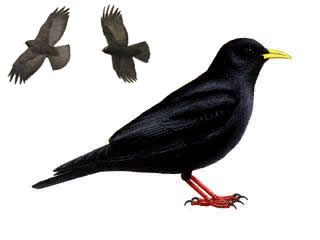 Pyrrhocorax graculus has a fragmented distribution in the mountains of central and
southern Europe, which accounts for less than half of its global range. Its European
breeding population is large (>130,000 pairs), and was stable between 1970-1990.
This trend continued during 1990-2000, with the vast majority of European
populations-including key ones in France, Russia and Turkey-probably remaining
stable overall.

Listen to the sound of Alpine Chough

Strictly mountains, breeding in middle latitudes of west Palearctic in generally colder climates and at greater altitudes than any other bird species, in Switzerland up to 3000 m and in Morocco up to 4000 m. While demanding inaccessible nest-site in enabled by mastery of air to range over wide variety of foraging habitats, from snowline to treeline or lower, tending however, to avoid snow cover and to favour alpine meadows, newly mown grasslands, and boulder slopes.

Breeds from early May to mid Jun in Alps, mid May to Jul in Morocco, Jun-Jul in Lebanon.
Nest site is located at a ledge or crevice in cave, cliff, tunnel, shaft, or building. Access to the nest sometimes through small entrance hole, with the site sometimes more than 10 m from entrance and often in darkness. The nest is a bulky mass of sticks, roots, twigs, moss, and plant stems. Lined with neat, compact cup of grass, fine twigs, rootlets, hair, and some feathers. Clutch size is 3-5 eggs, incubation lasts 18-21 days, by female only. The young fledge in 29 to 31 days.

This species has a large range, with an estimated global Extent of Occurrence of 1,000,000-10,000,000 kmÂ². It has a large global population, including an estimated 260,000-620,000 individuals in Europe (BirdLife International in prep.). Global population trends have not been quantified, but the species is not believed to approach the thresholds for the population decline criterion of the IUCN Red List (i.e. declining more than 30% in ten years or three generations). For these reasons, the species is evaluated as Least Concern. (source Birdlife.org)

Mainly sedentary, except for altitudinal movements. Alpine populations often make diurnal altitudinal movements of up to several km between feeding and roosting sites. In Switzerland, daily movements may exceed 20 km in length and cover 1600 m altitude. More birds than formerly may remain high in Alps in winter due to development of skiing above 3000 m and consequent artificial food sources.
Distribution map breeding season