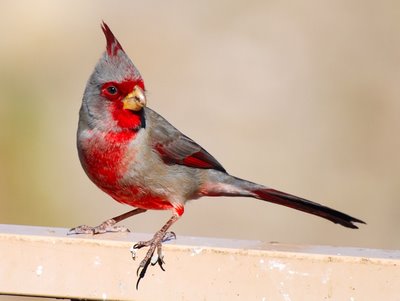 Male: A slender, gray and red bird, with a crest and a yellow,
stubby, almost parrotlike bill. The rose-colored breast and crest suggest a Cardinal, but the gray back and yellow bill set it apart. Female: Note the yellow bill.
The gray back, buff breast, and touch of red in the wings and crest separate it from the female Cardinal, which is browner with a reddish bill.

Listen to the sound of Pyrrhuloxia

Male sings in spring to defend territory; at beginning of breeding season, both male and female may actively chase intruders of their own species. In courtship, male often feeds female.
Nest: Placed 4-15′ above the ground, usuall
y in a thorny shrub or low tree, sometimes within a clump of mistletoe. Nest (built mostly or entirely by female) is an open cup made of thorny twigs, weeds, grass, strips of bark, lined with rootlets, plant fibers, fine grass.
Eggs: 3-4, sometimes 2-5. Pale grayish white to greenish white, spotted with brown and gray. Incubation is by female only, about 14 days. Male often feeds female on nest during incubation period.
Young: Both parents bring food for the nestlings. Young leave the nest about 10 days after hatching.

Mostly insects, seeds, berries.
Diet is varied. Feeds on many insects, including beetles, caterpillars, grasshoppers, and many others, also other arthropods. Eats many seeds, including those of weeds and grasses, and also frequently eat
s mesquite seeds. Feeds on berries and wild fruits, including cactus fruits. Will come to feeders for sunflower seeds.
Behavior: Forages mostly while hopping on ground; also does some foraging up in shrubs and low trees. Except when nesting, often forages in small flocks.

Southwestern United States to central Mexico. Migration: Not truly migratory, but strays often show up outside breeding range in fall and winter, and flocks regularly winter in areas not occupied during nesting season.