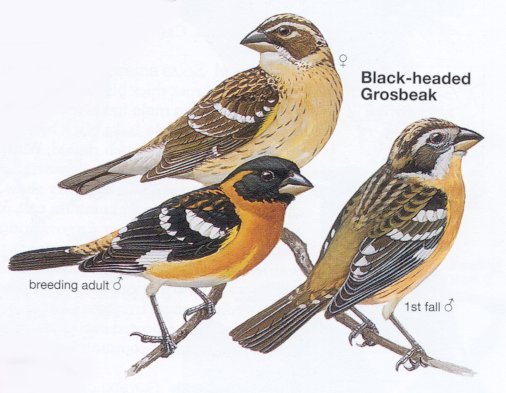 A stocky bird, larger than a sparrow, with an outsized bill.b Male: Breast, collar, and rump dull orange-brown.
Otherwise, the black head, bold black and white wing and tail pattern, and pale bill are similar to those of its eastern counterpart, the Rose-breasted Grosbeak. Female:
Largely brown, with sparrowlike streaks above; head strongly patterned with light stripes and dark ear patch. Breast strongly washed with ocher-brown;
streaks on sides fine, nearly absent across the chest. Female Rose-breast is more heavily striped below, lacks the strong ocher.

Listen to the sound of Black-headed Grosbeak

Male sings to defend nesting territory. In courtship, male performs song flights above female, flying with wings and tail fully spread while singing almost continuously.
Nest: Placed in tree or large shrub (usually deciduous), 3-25′ above the ground, usually about 10-12′ up. Nest (built mostly or
entirely by female) is an open cup, loosely constructed and bulky, made of twigs, weeds, rootlets, pine needles, lined with fine plant fibers, rootlets, and animal hair.
Eggs: 3-4, sometimes 2-5. Pale greenish blue, spotted with reddish brown. Incubation is by both parents, 12-14 days; only female incubates at night.
Young: Both parents bring food for the nestlings. Young climb out of nest after about 11-12 days but are unable to fly for about 2 more weeks; they perch in nearby trees waiting to be fed. Probably 1 brood per year.

Mostly insects, seeds, and berries.
In summer, feeds on many insects, including beetles, caterpillars, wasps, bees, flies, and many others, also spiders and snails. Feeds on seeds of various weeds, and eats berries of many plants (including mistletoe and poison-oak) as well as some cultiva
ted fruit. Young are fed mostly insects at first.
Behavior: Forages mostly in shrubs and trees, searching for food among foliage. Also may forage on ground and in low growth. Sometimes hovers to take insects from foliage or catches them in midair.

Southwestern Canada, western United States to southern Mexico. Winters in Mexico. Sometimes hybridizes with Rose-breasted Grosbeak where ranges overlap. Strays occasionally to Atlantic states, where it has wintered at feeding trays.
Migration: Tends to migrate late in spring and early in fall. Some birds begin to appear away from nesting areas as early as mid-July.