Source to all birds on the Planet
admin
Calcariidae, North America, Passeriformes
Comments 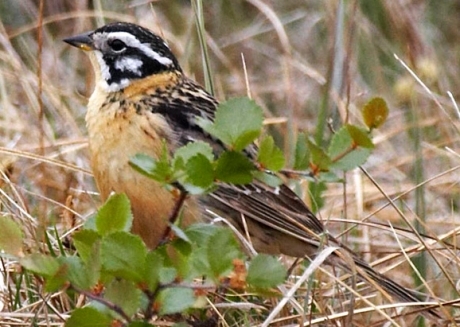 Listen to the sound of Smiths Longspur

Unusual breeding system. Breeds in small colonies, where males sing to attract females but do not defend territories. Both males and females are promiscuous; the young in a single nest are often of mixed parentage and may be fed by more than one male.

Nest:
On ground on dry hummock of tundra, among grass clumps or near base of low shrub. Often sunken in shallow depression. Nest (built by female) is open cup of grass and sedges, lined with lichens, hair, and particularly with feathers (ptarmigan feathers esp
ecially favored).
Eggs: 4, sometimes 3-5, rarely 1-6. Pale tan to pale green, marked with lavender and dark brown. Incubation is by female only, 11-13 days.
Young: Fed by female and by one or more males. Young leave the nest about 7-9 days after hatching, unable to fly well for about another week. 1 brood per year.

Mostly seeds and insects. Diet is mainly seeds for much of year, especially in w
inter, including seeds of weeds and grasses, also waste grain. Also eats insects, and these become major part of diet during breeding season; included are caterpillars, beetles, grasshoppers, flies, moths, damselflies, and others, as well as spiders and s
nails.
Behavior: Does all its foraging while walking or running on the ground. Except when nesting, usually forages in flocks.