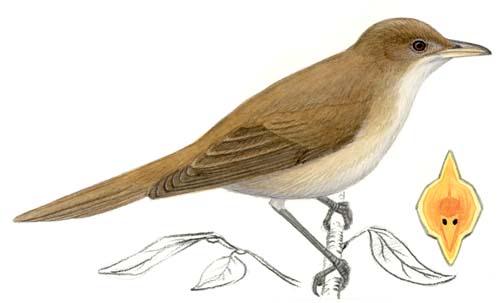 Listen to the sound of Thick-billed Warbler

Only limited information. 5-6 eggs are laid in a nest in a low tree

Like most warblers, it is insectivorous, but will take other small prey items.

This species has a large range, with an estimated global Extent of Occurrence of 1,000,000-10,000,000 km2. The global population size has not been quantified, but it is believed to be large as the species is described as ‘frequent’ in at least parts of its range (Baker 1997). Global population trends have not been quantified, but the species is not believed to approach the thresholds for the population decline criterion of the IUCN Red List (i.e. declining more than 30% in ten years or three generations). For these reasons, the species is evaluated as Least Concern.
Breeds in Asia from Ob? river and northern Mongolia east to Ussuriland and north-east China. Accidental in Britain: single birds, Shetland, October 1955 and September 1971. Finland: one, Norrsk
← Previous Post
Next Post →