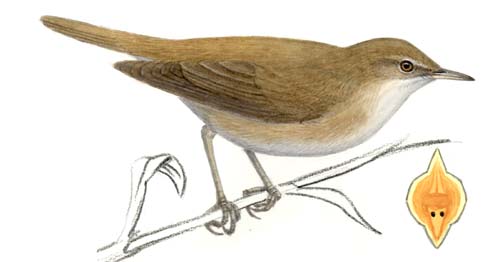 Medium-sized, compact, robust, and skulking but inquisitive warbler.
Plumage varies from brown olive to grey in adult and to rufous-brown in juvenil. Shows few features at any age except for rufous rump, with supercilium and eye-ring less distinct than any other Acrocephalus.
Sexes similar, no seasonal variation.

Breeds in middle latitudes of west Palearctic, mainly in lowlands with continental climate. Spreads into oceanic climatic zone in western France, England and Wales.
Stands of reeds used for nesting may be quite small, often by margins of sluggish rivers, ponds, or shallow lakes, or in narrow lines along ditches. Broader reedbeds in fresh or brackish waters tend to be less favoured, especially if dense and exposed to waves.

Breeds late May mid August in western and central Europe. Nest site is built in vegetation over water, especially reed, also in other tall vegetation and low shrubs over dry ground. Nest is a deep, cylindrical cup of grass and reed stems and leaves, plus plant down and spiders’ webs, woven round plant stems, lined with finer material including hair.
3-5 eggs are laid, incubation 9-13 days, by both sexes in roughly equal proportions during day.

Chiefly insects and spiders, some small snails, occasionally some plant material. An opportunist, able to tame advantage of local, variable, and short-lived sources of abundant food supply.
Feeds mostly at middle height in reeds and rushes and in centers of bushes, and occasionally on ground.