Source to all birds on the Planet
admin
Opisthocomidae, Opisthocomiformes, South America
Comments 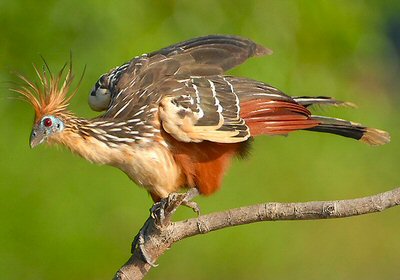 Adult Hoatzins are approximately 60 to 68 cm in length. They have blue skin covering their faces and their eyes are red. The outer feathers are primarily chestnut-brown and the long tail is bronze-green and ends in a white band. The heads of Hoatzins are topped with a crest of reddish-brown feathers. The young are born without feathers but develop a layer of black down shortly after birth. A distinguishing feature of young Hoatzins are the pair of functional wing claws which are found on the ends of their wings on the first and second fingers. This feature is lost when the bird matures into an adult.

Listen to the sound of Hoatzin

The habitat of Hoatzins includes swamps, fresh water marshes, gallery forests, and the banks of rivers, lakes and streams.

Hoatzins do not begin breeding until after their first year of life. The breeding season of Hoatzin occurs during the same time as the rainy season of their territory. Hoatzins build their nests on branches over the water about 2 to 6 meter above the surface. They normally lay two to three eggs and the incubation period lasts 32 days. Both male and female brood the young, which typically remain in the nest for 2 to 3 weeks after they hatch.

Although they typically feed on less than twelve species of plants, they are capable of eating the leafs of more than fifty different species. The leafs of tropical legume plants are an example of a leaf that Hoatzins commonly feed on. Other foods that are sometimes included in the diet of Hoatzins include some flowers and fruits. Opisthocomus hoazin have developed a special system that allows them to feed on leafs. They have an enlarged crop in which symbiotic bacteria are stored and used to break down the cell walls of the leafs, allowing for them to be digested. This process is called foregut fermentation and O. hoazin are the only birds with this type of digestive system. The bacteria within the crop also act as a source of nutrients for Hoatzins by occasionally getting moved into their stomachs. The bacteria are introduced to young Hoatzins when an adult regurgitates a sticky substance containing large amounts of the bacteria and feeds it to the young.