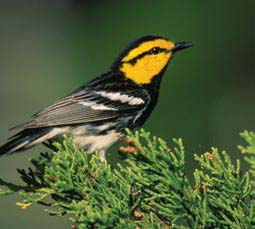 The Golden-cheeked Warbler is a migratory songbird that breeds only in Ashe juniper woodlands. Between 1960 and 1980, the area of this habitat was reduced by development pressures in central Texas by about a quarter. In addition, anticipation that the warbler would be federally listed as an endangered species prompted landowners to deliberately destroy more habitat in 1990. Breeding habitat is now fragmented and limited to the Edwards Plateau in central Texas, and it remains under severe pressure from human activity.

Habitat loss and fragmentation represent the clearest threats to the Golden-cheeked Warbler. Suburban sprawl remains the primary danger, but grazing, logging of the Ashe juniper, and mineral extraction activities are also encroaching on habitat. Nearby agriculture has also brought the Brownheaded Cowbird, which lay eggs in warbler nests that reduce the survival rates of warbler chicks.

Based on a 1990 survey cited in a 1999 Birds of North America account by Clifton Ladd and Leila Gass, BirdLife International estimates the 2005 population of the Golden-cheeked Warbler to be as few as 9,600 individuals or a many as 32,000. This birdâ€™s population is declining rapidly due to habitat loss.