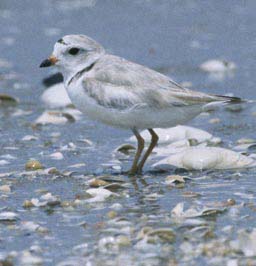 The Piping Plover is a small shorebird that nests on beaches and sandflats along the Atlantic Coast, the Great Lakes, and large rivers and lakes in the Great Plains on the United States and Canada. Piping Plover nests are inconspicuous in the sand, and newly hatched chicks look like small sand-colored balls of cotton. This camouflage is useful for evading predators, but it makes the nests vulnerable to being crushed by human feet, pets, and vehicles. As development has spread and become more dense in coastal areas, the presence of humans has taken a huge toll on nests, eggs, and chicks. The Piping Plover is listed by both the U.S. and Canadian governments and considered extremely endangered.

Disturbance and destruction of Piping Plover habitat remain the primary threats to the survival of this species. Destruction of nests and chicks during breeding season via human activity or predators continues in many areas. In addition, in many areas coastal erosion controls and water management practices in river systems greatly reduce and endanger nesting sites.

Although the geographic breeding range of the Piping Plover remains large, BirdLife International estimates that the total Piping Plover population in all three of the major breeding areas is only about 6,100. However alarming this number, it represents an increase of more than 9 percent from 1991 census numbers, with the improvement attributable to intensive management programs in both the United States and Canada.

The U.S. Fish and Wildlife Service lists the entire species of Piping Plover as either endangered or threatened. Programs at the federal and state level that are working in specific locales include predator fences, restrictions on motorized vehicles in the vicinity of flightless chicks, and stewards to control and monitor nesting sites on public and some privately held land. Education of the public also seems to help, as do more environmentally-sensitive coastal management and water management practices. For the Piping Plover to move more definitively back from the brink of extinction, however, such programs need to be replicated throughout the ploverâ€™s breeding areas.