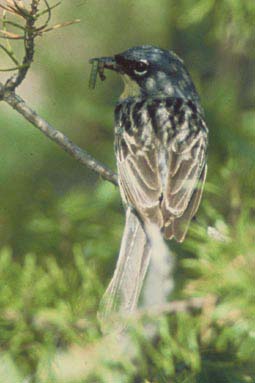 Kirtlandâ€™s Warbler is a small â€“ they weigh only half-ounce each â€“ migratory songbird that nests exclusively under trees in young jack pine forests in Michigan and sometimes Wisconsin and Ontario. Historically, this habitat is renewed when naturally occurring fires renew forests, with the heat from the fire forcing open the jack pine cone to release the seeds so that new trees may grow. Fire suppression by humans has dramatically decreased this habitat and, with it, the population of Kirtlandâ€™s Warbler. Logging and agriculture near the warblerâ€™s breeding habitat has also attracted Brown-headed Cowbirds, which lay eggs in other speciesâ€™ nests, including those of Kirtlandâ€™s Warblers. The cowbird eggs hatch before those of the warblers and the aggressive cowbird chicks out-compete the warbler chicks for food. Studies indicate that a single cowbird egg in a Kirtlandâ€™s nest may allow one to three warbler chicks to survive, whereas none of the warbler chicks tends to survive when two cowbird eggs are laid in the nest. The net effect is that, despite federal and state attention devoted to ensuring its survival, the Kirtlandâ€™s Warbler remains seriously endangered and is listed under the Endangered Species Act.

Scarcity of appropriate jack pine forests in Michigan and the presence of cowbirds remain threats to the survival of the Kirtlandâ€™s Warbler. In addition, feral cat populations in the scrub where the warblers winter in the Bahamas have become an issue of concern.

In 1989, the total Kirtlandâ€™s Warbler population in Michigan was believed to be around 200. Since then, intensive programs to promote suitable habitat and trap cowbirds have paid off. In 2005, the Michigan Department of Natural Resourcesâ€™s annual survey of male Kirtlandâ€™s Warblers counted 1,415 singing males. Assuming that all these males have mates, the total population is believed to be around 2,800.

The breeding and wintering habitat for the Kirtlandâ€™s Warbler must be protected. Cowbird control, which has tripled the rate of this warblerâ€™s reproductive success, must continue. Controlled burns and appropriate land management are also needed to renew breeding habitat.