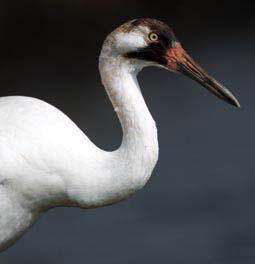 The poignant irony of human engagement with endangered birds is captured in the image of a delicate open-cockpit ultralight aircraft that looks like one of Leonardo da Vinciâ€™s flying machines guiding a flock of large, elegant white-andblack Whooping Cranes on their annual migration. Whooping Cranes once bred easily in the central rairies of the northern United States and Canada, wintering in the highlands of northern Mexico, the Texas Gulf Coast, and portions of the Atlantic Coast. Beginning in the late 1800s, however, the species declined rapidly due to collecting, shooting, and loss of habitat. By 1941, only about 20 Whooping Cranes could be found in the wild. They remain among the most endangered birds in the United States

The survival of Whooping Cranes is most threatened by the loss of wetland habitat in their wintering grounds and on their migration routes. Due to the birdâ€™s limited range and small population, damage caused by any local disaster â€“ e.g., an oil spill or a hurricane â€“ in its wintering or breeding range could destroy the entire wild population. In addition, the major river in the Aransas National Wildlife Refuge can dry up during droughts, threatening the blue crabs on which the wintering Whooping Cranes primarily feed. Some cranes have died by colliding with human-made objects, such as power lines.

In 1945, Audubon and the U.S. Fish and Wildlife Service began a project to learn more about the needs of Whooping Cranes in captivity. This work led to captive breeding after the crane was included on the Endangered Species List in 1967, which has rebuilt the population. The Whooping Crane Recovery Team, which reports to both the U.S. Fish and Wildlife Service and the Canadian Wildlife Service, estimates that in early 2006 there were 340 Whooping Cranes in the wild and 135 in captivity. The remaining wild population breeds in Canada and winters in the Aransas National Wildlife Refuge in Texas. There is also a small reintroduced nonmigratory flock in central Florida. To reintroduce the Whooping Crane to its eastern range in the United States, dozens of cranes bred in captivity have been released in Necedah National Wildlife Refuge in Wisconsin and are led by ultralight aircraft to winter in Chassahowitzka National Wildlife Refuge in Florida.

Additional funding is needed to support recovery and breeding programs and to preserve migratory stopover habitat. Stronger water and wetlands management policies are required to protect the rivers and wetlands upon which the Whooping Crane depends.