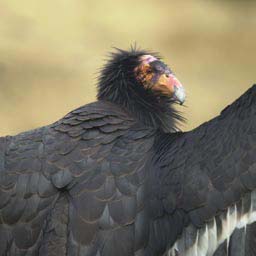 A huge bird with a small range and a tiny population, the California Condor is one of the most endangered birds in the United States. The California Condor is the largest bird in North America, weighing over 18 pounds and with a wingspan of more than nine feet. A scavenger that feeds on large mammal carcasses, it once flourished in Arizona, Utah, Colorado, Wyoming, Idaho, Montana, Oregon, and California. The California Condor became extinct in the wild in 1987, when the last six wild birds known were captured and placed in a captive-breeding recovery program. Now the condor exists only where it has been reintroduced, in open rangelands, coniferous forest, oak savanna, and rocky open-country scrubland areas of southern and Baja California and Arizona

The California Condor has very few natural predators. It is threatened solely by human activity, including shooting, collisions with power lines, and incidental poisoning from coyote control programs. In recent years, the primary threat appears to be lead poisoning from ingesting carcasses that have been shot with bullets containing lead. Curious by nature, condors have also been seen tearing apart discarded auto batteries in dumps, which exposes them to lead and other toxic materials. The condorâ€™s lack of fear around humans may put it at additional risk.

With about 125 birds having been cumulatively reintroduced into the wild, the California Condor population has slowly risen. In November 2005, the California Department of Fish and Game, Habitat Conservation and Planning Branch estimated that the population had reached about 270 individuals, including 145 in captivity.

The survival of the California Condor is almost entirely attributable to its listing as an endangered species. The U.S. Fish and Wildlife Service maintains captive-breeding and reintroduction programs, engages in research to enhance management of the species, and continues to monitor birds released into the wild. The Arizona Game and Fish Department encourages hunters to voluntarily use lead-free ammunition in the areas frequented by condors. The payoff for this work is an apparently somewhat reduced mortality rate for the California Condor in the wild in recent years.