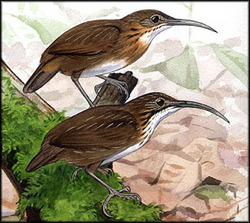 This is a timaliid assignable to the genus Jabouilleia by combination of the following characters: long, decurved bill; long legs, toes, and nails; relatively short tail and wings; general body proportions; and coloration. Separable from the other member of the genus by the longer bill, tarsus, hallux, and hallux nail; single, thick, black malar stripe, rather than two thin dark stripes separated by a white stripe; absence of rufous breast band; brown rather than rusty sides and flanks. Presumed distribution is limited to the premontane rainforest areas of northern Myanmar east of Putao. Similar habitats may extend westward into adjacent regions of Myanmar and Assam, India, and to the east into Yunnan Province of China, and perhaps even into northern Laos, but we have no data on this species from outside the immediate vicinity of Naung Mung. In fact, in February and March of 2001, we sampled extensively, using mist nets, at localities in the Himalayan and sub-Himalayan region of northern Myanmar north and east of Putao, including the Naung Mung area, accumulating 2,500 nethours at 28 sites representing all major primary and serai habitats at elevations ranging from 400 m to >3,000 m over a six-week period. One hundred and fifty-two individuals representing 76 species were captured, but no representatives of J. naungmungensis were found. Nevertheless, the fact that three birds were captured during nine days of netting (1,800 net-hours) would seem to indicate that, despite an apparently restricted distribution, the species is fairly common in temperate rainforest near Naung Mung. Discovery of a member of Jabouilleia at this locality is the first instance documenting a member of this genus in sympatry with the closely related genus Rimator.
← Previous Post
Next Post →