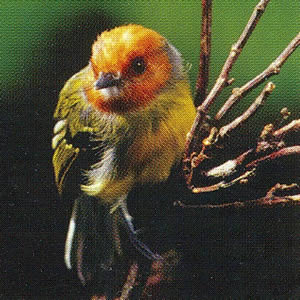 Small, well marked tyrant flycatcher. The most striking feature is the rich chestnut-red hood (except small white throat). Hind neck band is grey/black and remaining upperparts are green, with coverts, tertials and secondaries fringed yellow. Below the hood is a narrow, white breast band, and the remainder of the underparts are bright yellow. Poecilotriccus luluae is known from six localities in north-east Peru: at Wicsocunga, near Lonya Grande, in the northernmost extension of the Cordillera Central; two sites in the Cordillera de ColÃ¡n (30 km east of Florida, and south-east of Bagua); and three areas to the east in an unnamed range in the Eastern Andes (the GarcÃ­a area north-east of Abra Patricia; 6 km south-east of Corosha; and 33 km north-east of Ingenio). It has been recorded between 1,800-2,550 m elevation, and occurs in shrubby second growth, bamboo thickets and forest undergrowth, possibly with a preference for edge habitat (created by logging or roads in some case), but with occurrence also in bamboo thickets within undisturbed forest3. It forages almost exclusively through sally-gleans, mostly to the undersurface of live leaves, and is nearly always encountered in pairs. It has been reported as fairly common to the east of Abra Patricia. The remaining forests within the documented range of the species are being cleared for timber, agriculture and to secure land ownership, particularly rapidly on the Cordillera de ColÃ¡n (where local people estimated that all remaining forest might be cleared in the ensuing decade). The forest near Abra Patricia is under increased threat since the road was rebuilt in 1998. However, the species may benefit from edge habitat created by timber clearing. Johnson, N.K. & Jones, R.E. (2001) A new species of tody-tyrant (Tyrannidae: Poecilotriccus) from northern Peru Auk 118: 334-341.
download discovery article
← Previous Post
Next Post →