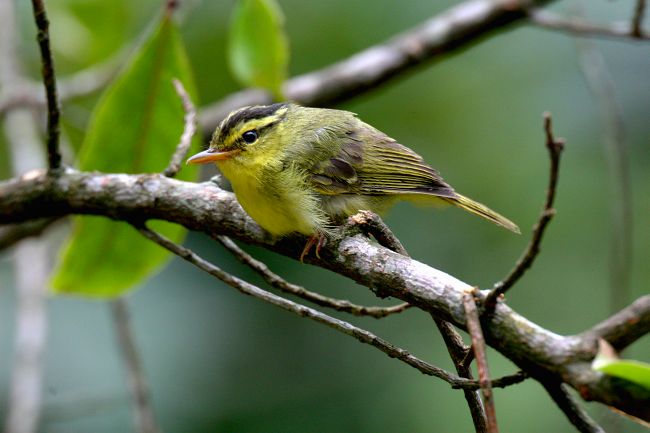 Beginning in 1994, ornithologists began to notice birds thought to be the Sulpher-breasted Warbler (P. ricketti) in breeding condition, singing, in what was their wintering range in Laos. Upon more detailed study, they realized these warblers represented a unique taxon. The plumage was nearly identical to P. ricketti but the Laos birds differed in songs, calls, and morphometrics. Analyzing the genetics, they found this new warbler was actually more closely related to the Yellow-vented Warbler (P. cantator), which is much more distinct in plumage, than P. ricketti, with which it is so nearly identical. Together the three species form a closely related group among Phylloscopus species, and they occupy distinct ranges in southeast Asia that don’t quite overlap, as is typical for a closely related species complex. The authors named this new warbler calciatilis (“dwelling on limestone”), the Limestone Leaf Warbler, after the unique limestone karst region it is endemic to.
A new species of Phylloscopus warbler, which we name Phylloscopus calciatilis Limestone Leaf Warbler, is described from central and northern Vietnam and central and northern Laos; it probably also breeds in southernmost China. In morphology, the new species is very similar to Sulphur-breasted Warbler Phylloscopus ricketti, but it is smaller with a proportionately larger bill and rounder wing. Its song and calls are diagnostic. Based on mitochondrial and nuclear DNA, the new species is most closely related to P. ricketti and Yellow-vented Warbler Phylloscopus cantator, and it is inferred to be sister to the latter. The mitochondrial divergences between these three species are at the low end of the variation found in other species of Phylloscopus and Seicercus warblers, but greater than in other taxa generally treated as subspecies. Possible introgressive hybridization between the new species and P. ricketti is discussed, but more data are needed to establish whether it does occur and, if it does, to what extent. The new species appears to have a restricted breeding range in limestone karst environments, where it is locally common and therefore not under any immediate threat. In view of the recognition of the new species, all previous records of P. ricketti sensu lato need to be re-evaluated.
← Previous Post
Next Post →