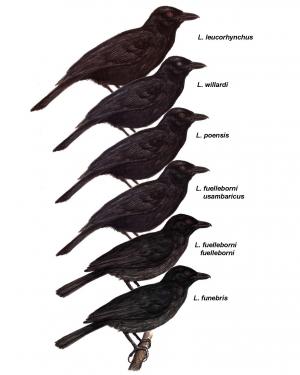 The above figure shows the new species -- Laniarius willardi -- in a series with other black/sooty boubou shrikes, highlighting the overall similarity among them and also the blue eye in the new bird. (Credit: Gary Voelker, Wildlife and Fisheries Sciences, Texas A&M University)

The bird Laniarius willardi, is a newly described species of boubou shrike (Malaconotidae) whose single distinctive trait is its blue-gray eyes. Abstract of the paper describing the new species in the July issue of the international ornithological journal The Auk follows here.

We describe Laniarius willardi, a new species of boubou shrike (Malaconotidae) from the Albertine Rift of Africa. The most conspicuous, distinguishing morphological feature of the species is a gray to blue-gray iris. This and external morphometric data indicate that L. willardi is diagnosable from other black or sooty boubous. Further, L. willardi is genetically diagnosable, and its closest relative is the Mountain Sooty Boubou (L. poensis camerunensis) from Cameroon. The Crimson-breasted Bush-shrike (L. atrococcineus) and the Lowland Sooty Boubou (L. leucorhynchus) are together the sister clade to L. willardiâ€”L.p. camerunensis. Laniarius willardi and the geographically codistributed L. p. holomelas differ by 11.5% in uncorrected sequence divergence, and elevational data taken from museum specimens suggest the possibility of elevational segregation of the species at 2,000 m, with L. willardi occurring at lower elevations. Our broad sampling of black and sooty boubou taxa indicate that (1) races of Mountain Sooty Boubou (L. poensis) do not form a monophyletic clade; (2) L. p. camerunensis may represent multiple, nonsister lineages; and (3) at least one race of FÃ¼lleborn’s Black Boubou (L. fuelleborni usambaricus) is genetically distinct from other races of that species.