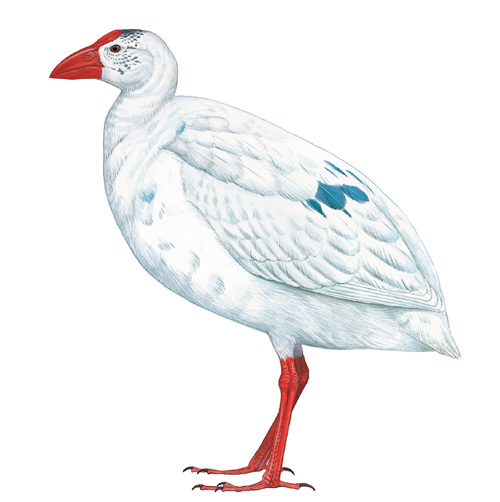 When British ships belonging to what was known as the First Fleet were dispatched under Governor Phillip to Australia during the late 1780’s, their task was to found a penal colony to which British felons could be transported. Much of interest surrounds this rather unpleasant endeavour and one of the by-products of the epic journey was a great upsurge in knowledge concerning Australian natural history.

One of the creatures that was brought to attention as a result of the expedition was a rather strange and albinistic swamphen that occurred on Lord Howe Island, a small and isolated piece of land lying some 480 km off the eastern coast of Australia. These birds were white, or mostly so, and considerably larger and heavier than ordinary swamphens and they had comparatively formidable bills. In fact, they seem to have been evolving independently into an entity that was reminiscent of New Zealand’s Takahe (Porphyrio man

Unfortunately for the birds, men who visited the island were easily able to kill them with sticks and this fact alone makes it highly likely that they were flightless. Just two specimens of the White Gallinule (or Lord Howe Swamphen) are in existence today, one in Vienna, the other in Liverpool. Once man began to visit their island home regularly, the species’ days were numbered, and it seems to have survived for only a few decades after the coming of the First Fleet.telli).