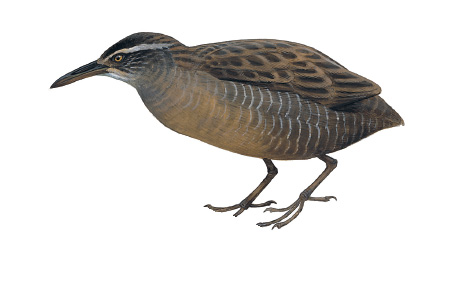 The Wake Rail has acquired the grim celebrity of having been eaten out of existence by hungry Japanese soldiers during World War II. Unable to fly, these rails could scuttle about their island home quickly, but despite their agility any efforts to escape would have been no match for the concerted efforts of a few peckish men.

Before World War II the rails were plentiful but by the time the Japanese garrison left Wake Island in 1945 there were none left. Remote Wake Island is situated far out in the Pacific, hundreds of kilometres from the Hawaiian group. Despite its extreme isolation, rails something like today’s Buff-banded Rail (Gallirallus philippensis) managed to colonize it at some period in the distant past, and from this ancestral stock the form developed that has become known as the Wake Rail. Over generations the size became smaller, the plumage lost its brightness and the wings became rudimentary. As Wake is small, low and scrub-covered, the rails probably had to make use of any food source that came their way; molluscs, insects and other invertebrates are likely to have provided the basic diet.

Other than the fact that breeding was observed to take place in July and August, and that individuals made the low chattering and clucking that is typical for a rail, nothing of substance is known of this species.