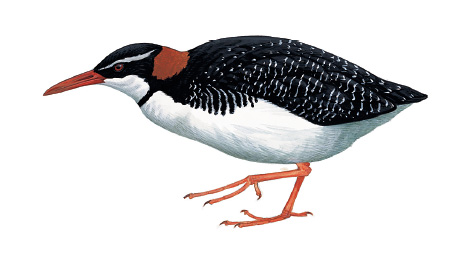 The Tahitian Red-billed or Tahiti Rail is known only from a painting that survives today in the collection of the Natural History Museum, London. This painting was produced by Georg Forster, one of the naturalists who sailed with Captain James Cook on his second epic voyage around the world during the 1770’s. Forster’s credentials are impeccable, so there need be no doubt that he saw just such a bird as that depicted.

The individual that served as a model for his picture was found on Tahiti, where it was known as tevea, oomnaa or eboonaa. No-one knows why it became extinct, or when, but it seems likely that this was connected with the introduction of cats and rats to the island.