Source to all birds on the Planet
admin
Gruiformes, North America, Rallidae
Comments 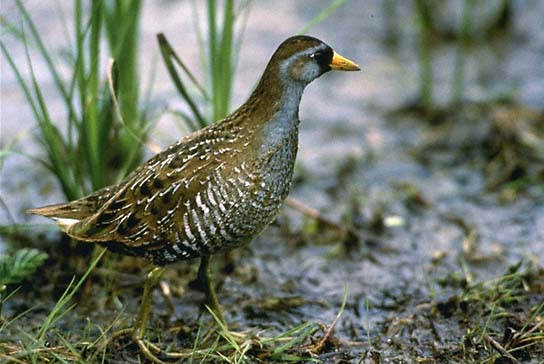 In its breeding plumage, the sora’s throat and face are black, with a short, yellowish bill. The breast and nape of neck are gray. The back is mottled brown and the belly displays black and white barring. Immature and non-breeding plumages are plainer and buff colored with no black on throat or face. While in this plumage, the throat is white and the breast is light brown. The legs of P. carolina are yellowish green. The tail is usually held erect while walking and flying. Sexes are alike

Listen to the sound of Sora

The sora occupies a freshwater wetland habitat throughout its range; it also uses salt marshes while overwintering. The preferred habitat provides considerable cover for breeding soras, and consists mostly of freshwater wetlands with stands of cattail, sedges, and other tall wetland plants

Nests are woven into a shallow basket from dead emergent wetland vegetation, and attached to stalks of dense, live vegetation. Nests are generally placed over or adjacent to water, occasionally occurring in dry environments such as willows or grassy habitat near water’s edge. The average clutch size ranges from 10-12 (sometimes 6-18) brown, spotted eggs, occasionally laid in two layers to accommodate such large numbers in a relatively small nest. Incubation by both parents lasts from 18-20 days, and is initiated with the laying of the first few eggs
Young hatch asynchronously due to incremental stages of incubation. Precocial downy young may be cared for by one parent, as the other parent incubates remaining eggs. Young soras leave the nest shortly after hatching, and mainly forage themselves, having been taught by a parent. At 21-25 days young soras fledge and gain independence from their parents’ care.

Diet consists mainly of seeds, insects and snails. Seeds are obtained from sedges, grasses or other wetland plants. Snails and insects are picked from ground surface, or by probing soft mud and vegetation with its bill.

This species has an extremely large range, and hence does not approach the thresholds for Vulnerable under the range size criterion (Extent of Occurrence <20,000 km2 combined with a declining or fluctuating range size, habitat extent/quality, or population size and a small number of locations or severe fragmentation). The population trend appears to be increasing, and hence the species does not approach the thresholds for Vulnerable under the population trend criterion (>30% decline over ten years or three generations). The population size has not been quantified, but it is not believed to approach the thresholds for Vulnerable under the population size criterion (<10,000 mature individuals with a continuing decline estimated to be >10% in ten years or three generations, or with a specified population structure). For these reasons the species is evaluated as Least Concern.
The sora (Porzana carolina) occupies much of temperate North America, ranging (in the west) as far north as the Northwest Territories, to the southern extremes of Arizona and New Mexico. The breeding range of P. carolina narrows in the east, occurring from Canada’s Maritime provinces south to Maryland, USA.