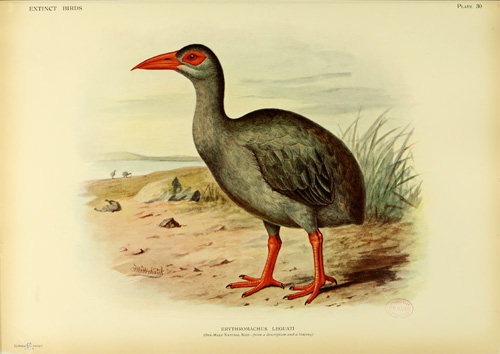 The Huguenot refugee Francois Leguat discovered a relative of the Mauritian Red Rail during his two-year sojourn on the island of Rodrigues:

Our Wood-hens are fat all the year round and of a most delicate taste. Their colour is always of a bright grey, and there is very little difference in the plumage between the two sexes. They hide their nests so well that we could not find them out and consequently did not taste their eggs. They have a red list about their eyes, their beaks are straight and pointed, near two inches long, and red also. They cannot fly, their fat makes them too heavy for it. If you offer them anything that’s red, they are so angry they will fly at you and catch it out of your hand, and in the heat of the combat we had an opportunity to take them with ease.

It is curious to note how this last piece of information conforms to the reported behaviour of the Mauritius Red Rail. An anonymous manuscript – alleged to have been written by a marooned sailor named Tafforet – dating from around 1725, described a creature that could not fly, was armed with a heavy beak, made a continual whistling, fed on tortoise eggs (Rodrigues was once home to a now extinct species of giant tortoise) and was a powerful runner. Since no subsequent visitor to Rodrigues mentions any such creature it may be assumed that these birds became extinct soon after 1725. In 1874 bones were found in a Rodrigues cave and these appear to correspond with the early accounts; they constituted the material on which Alphonse Milne- Edwards based his formal description of this species. Additional skeletal finds have subsequently been made.