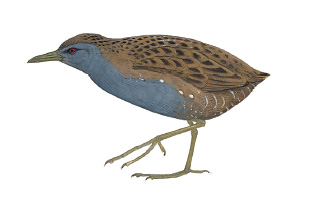 Laysan is a tiny coral island around 1280 km to the north-east of Hawaii, and one of its few inhabitants was a small species of rail. Because it is so remote, the island was infrequently visited but, nevertheless, there are several good accounts of the bird in life. These consistently tell of how bold the tiny creatures were, hunting for flies between the feet of men, or entering huts and other buildings in search of food. All kinds of insects and their larvae were eaten and the rails would often squabble with Laysan Finches (Telespyza cantans) over the broken eggs of noddies and terns (Sternidae).

Scraps were taken from the carcasses of dead seabirds, and vegetable matter was also consumed. In short, no food resource was neglected. The Laysan Crake was flightless, but birds could move with incredible swiftness and agility when attacked by frigatebirds (Fregata) and other larger seabirds. The call was described as a warbling and chattering, and there was a peculiar evening chorus that began soon after darkness fell and lasted for just a few seconds. The birds all started their chorus in unison and then all fell silent together. The sound produced was said to be like a handful of marbles being thrown onto a glass roof and then descending in a series of bounds. Breeding occurred between April and July. A nest was made of grass and leaves, and this material was arched over to make a roof with an entrance at the side. During the 1890’s these little birds were common but then rabbits and guineapigs were introduced to the island, and the habitat deteriorated. By 1925 the vegetation was gone, and Laysan was a desert. During this year two rails were seen, but by 1936 there were certainly none left. The species was not quite extinct, however.

During 1891 a few individuals had been transferred to Eastern Island in the Midway Atoll, and here the small population flourished. By the start of World War II the birds were common. Then, alas, a US Navy landing craft drifted ashore bringing with it an accidental invasion of rats. Within two years the last Laysan Crakes were gone.