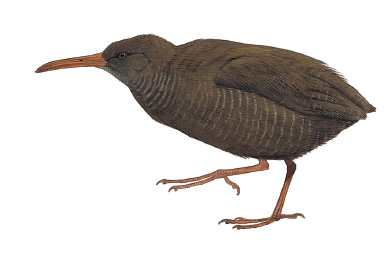 This species seems to provide a fairly typical example of the way in which rails develop on isolated islands. It is assumed that this is another form that has evolved from an ancestral stock resembling the Buff-banded Rail, but in this case the evolution was rather more advanced than in others.

Following the arrival of this ancestral stock, the birds diversified over aeons, assumed a neotenous appearance (adults began to resemble juveniles), lost the power of flight, and their plumage began to assume a rather hair-like appearance. All these developments enabled the birds to make maximum use of the rather limited resources available on the Chatham Islands, by cutting down on what were, for them, unnecessary and costly forms of energy expenditure, but, of course, they rendered them horribly vulnerable if, and when, the situation changed. The coming of man and his introduction of mammals, either intentional or not, caused just such a change. The species seems to have been on several islands of the Chatham group – Chatham Island itself, Pitt Island and Mangere – but it is from Mangere that the majority of surviving specimens come, and this seems to have been the last stronghold.

From here the birds vanished around 1900. By this time much of the land had been burned off, sheep were grazing and cats had overrun the island. All that is known of the species is that it nested in burrows or in hollow trees, ate insects and laid a creamy-white egg.