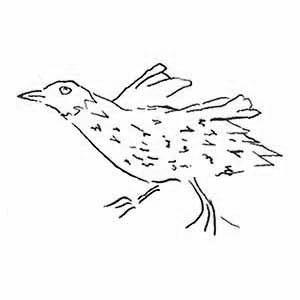 The evidence for the former existence of a small rail on Ascension Island is of two kinds. First, bones from a rail have been found on the island and, second, there exists a seventeenth century written account of just such a creature. This account was written by the much travelled Englishman Peter Mundy, the same man who also penned an account of the extinct rail of Mauritius. Mundy’s descriptions are always reliable and in this case he also provided a crude but explicit drawing of the birds he saw.

He wrote: Alsoe halfe a dozen of a strange kind of fowle, much bigger than our Sterlings…colour grey or dappled, white and blacke feathers intermixed, eies red like rubies, wings very imperfitt, such as wherewith they cannot raise themselves from the ground. They were taken running, in which they are exceeding swift, helping themselves a little with their wings…It was more than ordinary dainety meat, relishing like a roasting pigge. Nothing more is known of the species. Why and when it became extinct are also matters completely shrouded in mystery.