Source to all birds on the Planet
admin
Gruidae, Gruiformes, North America
Comments 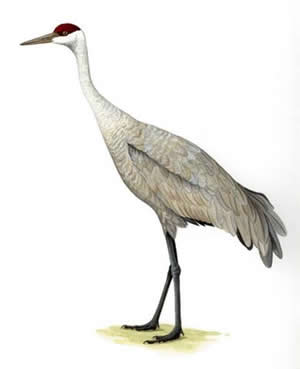 Listen to the sound of Sandhill Crane

Sandhill Cranes are primarily birds of open freshwater wetlands, shallow marshes, wet meadows, and adjacent uplands. They utilize a broad range of habitat types, from bogs, sedge meadows, and fens to open grasslands, stubble fields, and savannahs. They are omnivorous, feeding on a wide variety of plant materials (including waste grains), invertebrates, and small vertebrates, both on land and in shallow wetlands. During the breeding season, the three migratory subspecies utilize a wide variety of northern wetland types. Lesser Sandhill Cranes occur mostly in wetlands of the arctic lowland coasts, river deltas, and tundra, including bogs, shallow lakes, seasonal ponds, and riparian marshes. In some areas it nests on grassy hillsides and dunes and in shrubby wet meadows. The subarctic habitats of the Canadian Sandhill Crane consist of muskeg and other shallow wetland communities, open and forested bogs, and other boreal forest wetland types. Greater Sandhill Cranes are typically found in bogs, fens, cattail marshes, sedge meadows, shrub carrs, and other wetland types, as well as wetter open parklands, riparian areas, flooded meadows, and beaver ponds. In the more arid parts of its western breeding range, it is found in shallow wetlands and along rivers. In agricultural areas, it prefers nesting sites close to cultivated fields. The size of nesting territories varies widely within the breeding range.

They need adequate emergent vegetation to build their 4 to 5 foot diameter nests on mounds that rise above the water. Sandhill cranes depend on agricultural lands for the bulk of their food on migration routes; therefore pastures and crop fields interspersed with wetlands can provide ideal habitat.

Nests in wetland sites are built of the dominant vegetation in the nesting area; dry site nests are minimally prepared. The incubation period is 29-32 days, and chicks fledge at 67-75 days. Average fledging periods tend to be longer for southern populations. 2 buff eggs, spotted with brown, in a large mound of grass and aquatic plants in an undisturbed marsh.

This species has an extremely large range, and hence does not approach the thresholds for Vulnerable under the range size criterion (Extent of Occurrence <20,000 km2 combined with a declining or fluctuating range size, habitat extent/quality, or population size and a small number of locations or severe fragmentation). The population trend appears to be increasing, and hence the species does not approach the thresholds for Vulnerable under the population trend criterion (>30% decline over ten years or three generations). The population size is very large, and hence does not approach the thresholds for Vulnerable under the population size criterion (<10,000 mature individuals with a continuing decline estimated to be >10% in ten years or three generations, or with a specified population structure). For these reasons the species is evaluated as Least Concern.
With a total estimated population of more than 500,000, the Sandhill Crane is the most abundant of the world’s cranes. It is widely (though intermittently) distributed throughout North America, extending into Cuba and far northeastern Siberia. Six subspecies have been described. The three migratory subspecies-the Lesser, Greater, and Canadian Sandhill Cranes-are relatively abundant. They are distributed across a broad breeding range in northern North America and eastern Siberia, with wintering grounds in the southern United States and northern Mexico. The other three subspecies-the Mississippi, Florida, and Cuban Sandhill Cranes-exist as small, non-migratory populations with restricted ranges in the southern United States (Mississippi, Florida, and southern Georgia) and Cuba.
The total population is increasing in numbers, although some local populations may be declining.
The Sandhill Crane breeds primarily in northern North America and extreme northeastern Siberia, and winters in northern Mexico and the southern United States. Non-migratory populations are found in Mississippi, Florida, and Georgia in the southern U.S., and in Cuba. There are few reliable records regarding the distribution of the Sandhill Crane at the time of European settlement. The species was probably more widely distributed, especially in its southern breeding range (Tacha et al. 1992). At the species level, the Sandhill Crane reached its low point in terms of conservation status in the mid- to late-1930s, after hunting had extirpated or depleted many populations and European settlement (mainly through agricultural expansion and the conversion of wetlands) had deprived it of much of its original habitat in the southern portions of its range.

Northern races wholly migratory; winter in southern USA and Mexico, including east Siberian breeders which cross Bering Straits on both passages. Only stragglers occur Canada east of Hudson Bay or in Atlantic states of USA; 2 on Prince Edward Island in autumn 1905, contemporaneous with first European occurrence.