Source to all birds on the Planet
admin
Eurasia, Gruidae, Gruiformes
Comments 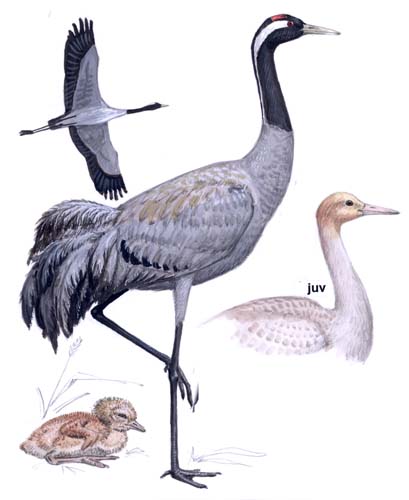 Listen to the sound of Crane

The Eurasian Crane breeds in wetlands of the Eurasian boreal and temperate forest zones, from lowlands up to 2200 m, often foraging in nearby upland areas. Across this extensive breeding range, the species nests in a variety of shallow (20-40 cm) freshwater wetland types, including open marshes, forested swamps (especially birch and alder swamps), sedge meadows, lake edges, and bogs. In central Asia, drier habitats (even semidesert areas) may be used if water is available. Former breeding habitats in southern Europe were primarily permanent, densely vegetated marshes. Eurasian Cranes are omnivorous, probing and picking for a wide range of plant and animal foods both on dry land and in wetlands. Even during the chick-rearing period, however, they prefer to forage in upland areas (including agricultural fields) with short vegetation.
In most areas, Eurasian Cranes prefer large, isolated nesting territories with nesting sites that are well protected from disturbance. However, they have proven adaptable to even heavy human interference under some circumstances. Over the last three decades, breeding cranes in Scandinavia and central Europe have begun to use smaller and less wild wetlands within intensively cultivated landscapes. In northeast Germany they now breed in small (<1000 m2) wet depressions in the midst of agricultural fields. These birds are more tolerant of the presence of humans than those that breed in larger, more natural forested swamps. Breeding cranes have also returned to artificial and restored wetlands in areas (especially in Germany) from which they had been extirpated.
On their wintering grounds, Eurasian Cranes roost in wetlands and other shallow waters and forage for waste and sown grain, acorns, insects, and other foods in agricultural fields, pastures, and other upland habitats. In general, plant items are much more important in the winter diet. Feeding and roosting habitats are highly varied throughout the species’ widely scattered wintering grounds: open holm oak woodlands (dehesas and montados), cereal fields, and shallow wetlands in the Iberian Peninsula; lakebeds, large river valleys, and upland grasslands in North and East Africa; shallow lakes, reservoir edges, and coastal marshes in the Middle East and North Africa; agricultural fields, grasslands, reservoir margins, and other shallow water bodies in India; and shallow lakes, agricultural fields, and deltaic wetlands in China.

Nests consist of mounds of wetland vegetation. Eggs are laid primarily in May, usually two per clutch. The incubation period is 28-31 days, and chicks fledge at around 65-70 days. After the chicks fledge, Eurasian Cranes gather in large flocks prior to migration. In some areas these flocks assemble in agricultural fields, where they can cause crop damage. Flocks increase in size as the cranes gather at traditional staging areas before and during migration. Along their migration routes, they often forage in agricultural fields and roost in shallow lakes, large riparian wetlands, wet meadows, and other wetlands.

This species has an extremely large range, and hence does not approach the thresholds for Vulnerable under the range size criterion (Extent of Occurrence <20,000 km2 combined with a declining or fluctuating range size, habitat extent/quality, or population size and a small number of locations or severe fragmentation). The population trend is not known, but the population is not believed to be decreasing sufficiently rapidly to approach the thresholds under the population trend criterion (>30% decline over ten years or three generations). The population size is very large, and hence does not approach the thresholds for Vulnerable under the population size criterion (<10,000 mature individuals with a continuing decline estimated to be >10% in ten years or three generations, or with a specified population structure). For these reasons the species is evaluated as Least Concern.
Grus grus is a widespread summer visitor to northern Europe (occurring more patchily
farther south), which holds >50% of its global breeding population. Its European
breeding population is relatively small (<110,000 pairs), and underwent a large decline between 1970-1990. Although the species increased substantially overall during 1990- 2000-with increasing or stable trends across most of its European range-its population has probably not yet recovered to the level that preceded its decline.
This species is breeding from central Europe and Scandinavia to central Siberia. Since several centuries it undergoes a decline of its numbers and a contraction of its breeding area. It became extinct in many regions, and this regression was accelerated during the twentieth century. The major part of the birds breeding in Scandinavia, Finland, Germany and the Baltic States is wintering in Spain and small numbers winter also in France, Portugal and Morocco. Since the end of the 1960’s this populations has nearly doubled, and it has been able to re-establish itself in some regions of France and the British Isles. Currently it can be estimated at 70000 individuals, which 1300-1600 pairs are nesting in the European Union (Germany). Some birds from Scandinavia and Eastern Europe move to the south-east. This population is estimated at 30000-70000 individuals. Naturally this birds inhabits swampy clearings, fens and large swamps inside coniferous or deciduous forests. Since about 1969 it became adapted to cultivated areas.
The Eurasian Crane is the third most abundant species of crane after the Sandhill and Demoiselle Crane. The total population, estimated at between 220,000 and 250,000, is probably increasing, although some populations are declining. As no coordinated survey has been carried out throughout the entire species’ range, this assessment should be considered tentative. The species is not globally threatened, but does have special protected status in many countries. The species is classified Lower Risk (Least Concern) under the revised IUCN Red List Categories.
Breeding populations in European Russia and central Siberia are classified Vulnerable, while small populations in Turkey and the Tibetan Plateau are classified Data Deficient.
The species’ breeding range extends from northern and western Europe across Eurasia to northern Mongolia, northern China, and eastern Siberia, with isolated breeding populations in eastern Turkey and Tibet. The winter range includes portions of France and the Iberian Peninsula, north and east Africa, the Middle East, India, and southern and eastern China. The species continues to occupy most of its historic range, but over the last 200-400 years it has been extirpated as a breeding species in southern and western Europe, the Balkan Peninsula, and southern Ukraine.

Migratory in northern Europe, though isolated groups breeding east and south of Black Sea perhaps resident or make only short movements. Birds breeding Europe east to Pechora river (Russia) mainly winter southern Europe, North and north-east Africa, and Turkey to south-west Iran. From late 1970s, large numbers have begun to winter in recently created wetlands in east-central France.
Usually migrates in V or double-V formation. Unlike White Stork, readily crosses wide stretches of water, so no extreme funnelling around seas, but both species show comparable trend for separate south-west and south to south-east passages across Europe in autumn (reverse in spring). Cranes using these 2 major migration routes come from partially overlapping breeding areas, and migration along south Baltic complex due to crossing of these flyways. Various traditional halting places around Baltic in autumn and spring, some involving thousands of birds.
Family parties and especially non-breeders (which summer within breeding range) begin to move in July, but no large-scale migration until September; main departures from German halting places between late September and mid-October. Vanguard reaches Ethiopia early September, but present African winter quarters mainly October-March. Return movements across east Mediterranean and Iberia mainly during March. Principal passage across Baltic into Sweden 4-23 April, and also spreads north and east into FSU during April.