Source to all birds on the Planet
admin
Eurypygidae, Gruiformes, Latin America
Comments 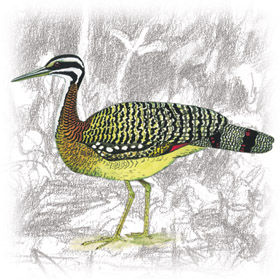 The sunbittern is an elegant bird with long legs, a slender heron-like neck and a long bill. It is about 45 cm in length, with a stout body and relatively small head. The sunbittern?s body plumage is full and soft with an intricate design of colors. The head is almost all black with white striping above and below its ruby-red eyes. The sunbittern?s neck, breast and shoulders are brown, and the belly, throat and undertail are a pale buff white. Hidden under the brown plumage is a rich orange-chestnut patch near the tip of each wing. The lower jaw and legs are a bright orange color.
The size, coloration and decoration of the sunbittern does not differ between males, females or even juveniles. As a sunbittern spreads its wings, it reveals conspicuous patches of chestnut and orange on the primary wing feathers and bands of the same color across the tail. This spectacular frontal display is for threat or defense rather than courtship and is usually accompanied by a low hiss and bowing.
With its slow, deliberate walk on orange-colored legs and its long neck held parallel to the ground, the sunbittern resembles the sun-flecked forest interior.

Listen to the sound of Sunbittern

Sunbitterns are found in the New World tropics in Central America and South America. They occupy most of the southern part of Central America south to western Ecuador, and South America east of the Andes Mountains through the Amazonian portions of Colombia, Venezuela, and Guineas, as well as portions of Brazil, Ecuador, and Peru. In suriname uncommon, mostly found along creeks and also coffee plantations.

Sunbitterns prefer forested habitats near permanent water sources. These include fast-flowing mountain streams, slow-flowing rivers, pond areas, and swamps. Sunbitterns are generally found at altitudes between 300 and 4,000 feet (100 to 1,200 meters) although they have been seen at higher elevations as well.

Typical courtship consists of the pair of birds walking together or circling, necks extended up, beaks slightly elevated while tittering softly.
Nests are usually built in a tree or bush, 3-6 meter above the ground, and less frequently on the ground. Nests are made of sticks, mud and decaying vegetable material. The shallow cup of the nest contains a clutch of two or three eggs. The eggs are light brown or buff with dark spots and blotches. Both parents take turn incubating the eggs, which hatch after 27-28 days. The male and female protect and feed the chicks in turn during the first two weeks, never leaving the nest unattended. Thereafter, chicks are left alone for several hours each day as both parents hunt for food.

Sunbitterns are usually found singly or in pairs, walking with a deliberate gait along the muddy stream or lake shores, among rocks, rushing water, or wading in shallow waters. Sunbitterns hunt fish, amphibians, crustaceans and insects, which they catch by striking quickly, using their long necks and spear-like bills.

This species has a large range, with an estimated global Extent of Occurrence of 8,500,000 km
← Previous Post
Next Post →