Daedalus had a nephew named Perdix, whom he had taken when a boy to teach the trade of builder. But Perdix was a very apt learner and soon surpassed his master in the knowledge of many things. His eyes were ever open to see what was going on about him, and he learned the lore of the fields and the woods. Walking one day by the sea he picked up the backbone of a great fish, and from it he invented the saw. Seeing how a certain bird carved holes in the trunks of trees, he learned how to make and use the chisel. Then he invented the wheel which potters use in molding clay; and he made of a forked stick the first pair of compasses for drawing circles; and he studied out many other curious and useful things.
Daedalus was not pleased when he saw that the lad was so apt and wise, so ready to learn, and so eager to do.
“If he keeps on in this way,” he murmured, “he will be a greater man than I; his name will be remembered and mine will be forgotten.”

Day after day, while at his work, Daedalus pondered over this matter, and soon his heart was filled with hatred towards young Perdix. One morning when the two were putting up an ornament on the outer wall of Athena’s temple, Daedalus bade his nephew go out on a narrow scaffold which hung high over the edge of the rocky cliff whereon the temple stood. Then when the lad obeyed, it was easy enough, with a blow of a hammer, to knock the scaffold from its fastenings.
Poor Perdix fell headlong through the air, and he would have been dashed in pieces upon the stones at the foot of the cliff had not kind Athena seen him and taken pity upon him. While he was yet whirling through mid-air she changed him into a partridge, and he flitted away to the hills to live forever in the woods and fields which he loved so well. And to this day, when summer breezes blow and the wild flowers bloom in meadow and glade, the voice of Perdix may still sometimes be heard calling to his mate from among the grass and reeds or amid the leafy underwoods. In some districts of France, it is said, the weight of the partridges found on an estate is considered as a fair standard test of the productiveness of the soil and of the state of agricultural skill.

The Bohemians believe that the flight of a partridge over a house prognosticates its destruction by fire.

Some Italian scientists assert that tame partridges cry out loudly when poison is being prepared in the house.

In Swabia the peasants infer the price of corn during the coming autumn from the number of times the quail utters in the fields its cry, if it cries three times, corn will be three gulden a bushel. The same belief prevails in Tuscany, the centre and west of France, and Switzerland. 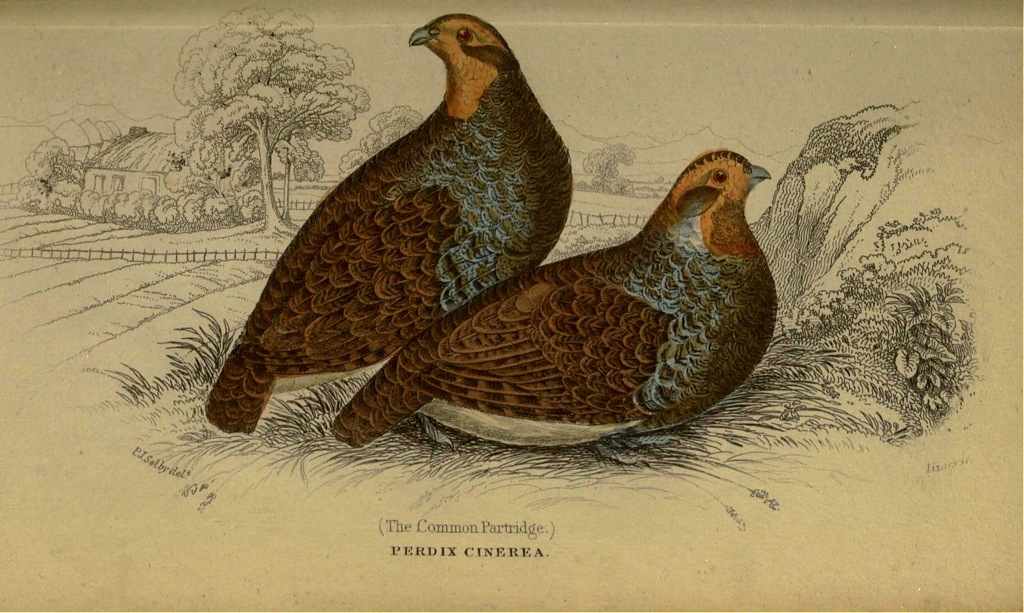