Source to all birds on the Planet
admin
Gaviidae, Gaviiformes, North America
Comments 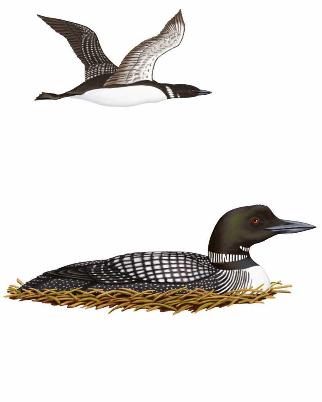 The Common Loon in summer is very striking with its black-and-white checkered back, glossy black head, white belly and wing lining, and characteristic white necklace around the throat. All loons have greyish feathers in the winter, and immature birds tend to resemble adult birds in winter plumage. The white feathers of the belly and wing linings are present year-round.

Loons’ habit of swimming low in the water helps to distinguish them from other waterbirds, such as ducks and geese. Loons most resemble the grebes, but can be identified by their larger size, thicker necks, and longer bills. In flight, loons can be recognized by their humpbacked profile, with head and neck held low and feet pressed back towards the body and projecting beyond the tail.

Males and females look the same, although males are generally larger. Adults are large-bodied, weighing from 2.7 to over 6.3 kg and measuring almost a metre from bill tip to outstretched feet. The bill is quite large, averaging 75 mm in length, and is black in colour throughout the year.

The skeleton and muscular system are designed for swimming and diving. Loons are streamlined. Their legs are placed far back on their body, allowing for excellent movement in water but making them ungainly on land. The head can be held directly in line with the neck during diving to reduce drag, and the legs have powerful muscles for swimming.

Listen to the sound of Loon

Hunting, feeding, resting, preening, and caring for young are the loon’s main activities. The bird spends long rest periods motionless on the water. It may rouse itself to stretch a leg or wing at intervals, occasionally comically waggling a foot. When swimming on top of the water it will sit erect with neck slightly curved. The loon will peer underwater, moving its head from side to side to locate prey. It then aims and dives quickly. It will stay underwater for almost a minute and can dive to depths of 80 m. During the dive, feathers are compressed and air is forced from between the feathers and from the air sacs in the body. Loss of air from the air sacs also allows the loon to quietly sink below the water surface to avoid danger.

Adult loons may fly to different lakes to feed. The adaptations that make loons such efficient divers also make them heavy and slow to take wing.

Common Loons spend most of the time on water and have to pull themselves onto land to nest. They generally move one foot at a time to walk, shuffling along with their breast close to the ground. The loon returns to the water by sliding in along its breast and belly. At night, loons sleep over deeper water, away from land for protection from predators.

Loons arrive in pairs on northern lakes in the spring as soon as the ice thaws. They are solitary nesters. Small lakes, generally those between 5 and 50 ha, can accommodate one pair of loons. Larger lakes may have more than one pair of breeding loons, with each pair occupying a bay or section of the lake. Until recently, loons were thought to mate for life. Banding studies have shown that loons will sometimes switch mates after a failed nesting attempt, even between nestings in the same season. Courtship and mating are a quiet time, with the pair swimming and making short dives together. Eventually the male leads the female to a suitable spot on land for mating. Nest building then begins.

Loons build their nests close to the water, with the best sites being completely surrounded by water, such as on an island, muskrat house, half-submerged log, or sedge mat-a clump of grass-like water plants. Generally the birds can slip directly from the nest to water. The same sites are often used from year to year. Loons will use whatever materials are on hand to build their nests. Researchers have found tree needles, leaves, grass, moss, and other vegetation under loon eggs. If material is not handy, loons will lay their eggs directly on the mud or rock. Sometimes clumps of mud and vegetation are collected from the lake bottom to build the nest. Both the male and female help in nest building and with incubation, or warming the eggs, which lasts until hatching, usually 26 to 31 days. If the eggs are lost, the pair may renest, often in the same general location.

Usually two eggs are laid in June, and towards the end of the month loon chicks covered in brown-black down appear on the water. Loon chicks can swim right away, but spend some time on their parents’ backs to rest, conserve heat, and avoid predators such as large carnivorous fish, snapping turtles, gulls, eagles, and crows. After their first day or two in the water, the chicks do not return to the nest.

Chicks are fed exclusively by their parents for the first few weeks of life, and up until eight weeks of age the adults are with them most of the time, providing most food. After this time the chicks begin to dive for some of their own food and by 11 or 12 weeks of age, the chicks are providing almost all of their own food and may be able to fly. Chicks are fed small food items early in their life including snails, small fish, crayfish, minnows, and some aquatic vegetation. As they grow, they require more protein, and usually are fed more fish, if available. At migration time, the young are able to look after themselves, and the adults generally leave first, with young following soon after.

Sometimes loons gather into small groups in the summer. In September, group feeding is quite common as loons gather on larger lakes while migrating. Loons are also usually found in groups on the wintering grounds.

The life expectancy of the loon may be 15 to 30 years.

From Iceland and Greenland main departures, singly or in small parties, September-October, though some winter southern coasts. Minority reach winter quarters (e.g. Scotland) from mid-August, probably mainly immatures or failed breeders. Spring return early May to mid-June according to latitude and weather, remaining in bays and fjords until thaw of inland ice. Pre-breeders summer chiefly in northern coastal waters, some regularly in Shetland, but seldom North Sea.