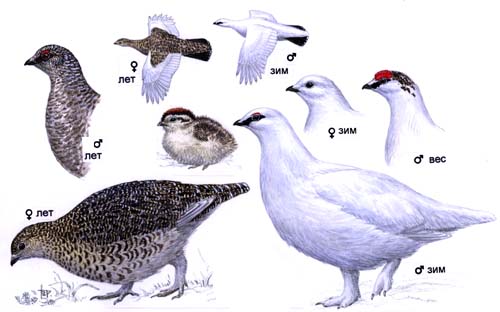 Ptarmigan cocks retain their winter plumage during the breeding season and into the summer. When displaying, they look stunning in their pure white-and-black plumage and red combs. Their feathers become dirty from dust bathing once the snow disappears and, in late summer, are replaced by a barred plumage similar to that of the females. By the time hens, or females, have reared their broods, the cocks moult into a more greyish fall plumage. Both male and female Ptarmigans barely complete the fall moult before they begin to turn white once again. During their first two to three weeks of life, ptarmigan chicks have a downy plumage of intricate yellow, brown, grey, and chestnut patterns. They then assume a brownish juvenile plumage, not unlike that of females, which is retained until fall, when it is replaced by the typical white winter plumage.

In winter, male-and some female-Rock Ptarmigans sport a black stripe that extends through the eye to the bill (as if they had put on charcoal goggles to prevent snow blindness)

Listen to the sound of Ptarmigan

Rock Ptarmigans live at higher elevations and latitudes, where their typical habitat is rather dry and supports sparse, very low vegetation. In late fall, ptarmigans seek more protected areas, moving down slopes or southward into the taller vegetation of dense shrubs and forested areas.

The winter daily schedule consists of feeding by day and roosting under shrubs or in snow burrows at night and during extreme weather. The quality and depth of snow are important factors influencing survival. Snow depth determines what food will be available. Along with snow hardness, it also determines whether suitable roosting conditions exist to protect the ptarmigans from cold winds and how effectively such predators as foxes, lynx, wolves, and martens can pursue the birds.

Ptarmigans are generally considered monogamous, or having only one mate at a time. However, when Rock Ptarmigan populations are exceptionally high, cocks have been observed mating with two, and occasionally three, hens that nested on their territories. This is called polygyny. In such cases, males sometimes steal their neighbours’ mates. The females of a polygynous male compete intensely among themselves for the male’s attention, and a hierarchy develops, with the male’s favourite mate holding the dominant position.

At the beginning of incubation, or keeping the eggs warm until they hatch, male ptarmigans guard their females. However they gradually lose interest, leaving their mates to complete incubation and rear the brood on their own.

Although all chicks usually hatch within a few hours, hatching may take as long as a day. During this time, the hen keeps the brood warm, but the youngsters emerge from under her breast for short periods. Then, while making low vocalizations, the hen leads the chicks, each weighing about 15 g, from the nest. At first the family hunts for food in the vicinity of the nest, but it then ranges over an increasingly large area and can travel considerable distances in search of suitable food.

Like other grouse, ptarmigans are mostly plant eaters. In summer, they sample the leaves, buds, catkins, flowers, seed capsules, bulblets, and berries of a wide variety of tundra plants. They also consume mosses and supplement their menu with insects and spiders when these are available. They have an uncanny knack of choosing the most nutritious material available, a necessity for meeting their high energy demands.

Chicks need a high-protein diet for rapid growth. After eating the yolk sac from which they hatched, they begin to pick up a variety of objects, especially caterpillar, other invertebrates, flowers, and seeds.

Winter is the critical time, as the choice and quantity of food are reduced to the few plants found above the snow or in windswept places. Ptarmigans eat the seeds, buds, and twigs of low willows, alders, and dwarf birches.Rock Ptarmigans are adept at scratching in shallow snow to reach buried vegetation such as the ground-hugging purple saxifrage. They also take advantage of feeding craters made by caribou, muskoxen, and arctic hares. White-tailed Ptarmigans supplement their diet with the needles and buds of spruces, pines, and firs.

This species has a large range, with an estimated global Extent of Occurrence of 10,000,000 km2. It has a large global population estimated to be 8,200,000 individuals (Rich et al. 2003). Global population trends have not been quantified, but the species is not believed to approach the thresholds for the population decline criterion of the IUCN Red List (i.e. declining more than 30% in ten years or three generations). For these reasons, the species is evaluated as Least Concern.
This grouse has a discontinuous distribution in arctic, boreal and alpine regions of North America and Eurasia. It lives at greater altitude or latitude than the Red Grouse (Lagopus lagopus) mainly above the tree line. The races helveticus of the Alps and pyrenaicus of the Pyrenees are adversely affected by degradation of their habitat and by disturbance from tourism development

All Palearctic populations basically resident, but eruptions occur in arctic latitudes. In warm weather of late summer often ascends hills and mountains above breeding altitudes, following retreating snowline; in Greenland does so to take advantage of unused food resources, and this probably general. During late autumn and winter descends to lower altitudes when dictated by local weather conditions.
Longer movements occur in some arctic populations. Spitsbergen population makes inter-island movements in some years. In Iceland, endemic race islandorum nomadic in winter, moving about freely under influence of snow cover and food availability, with ringing recoveries up to 275 km.