Source to all birds on the Planet
admin
folklore, Malaconotidae
Comments

Mother Brubru has a young son of whom she is very fond, and she resolves to teach him “plenty sense.” She takes him out for a lesson in flying. She sets him on the ground, and hops along in front, always looking to the right or left, the front or rear. Young Brubru asks her why she looks around at every hop. ” To be on guard against enemies. In this world one should always look before moving.” Soon after Young Brubru has learned to fly, a big war breaks out between the Birds and the Snakes. The Snakes take all the palm-trees, and the Birds can get no palm-nuts and are hungry. 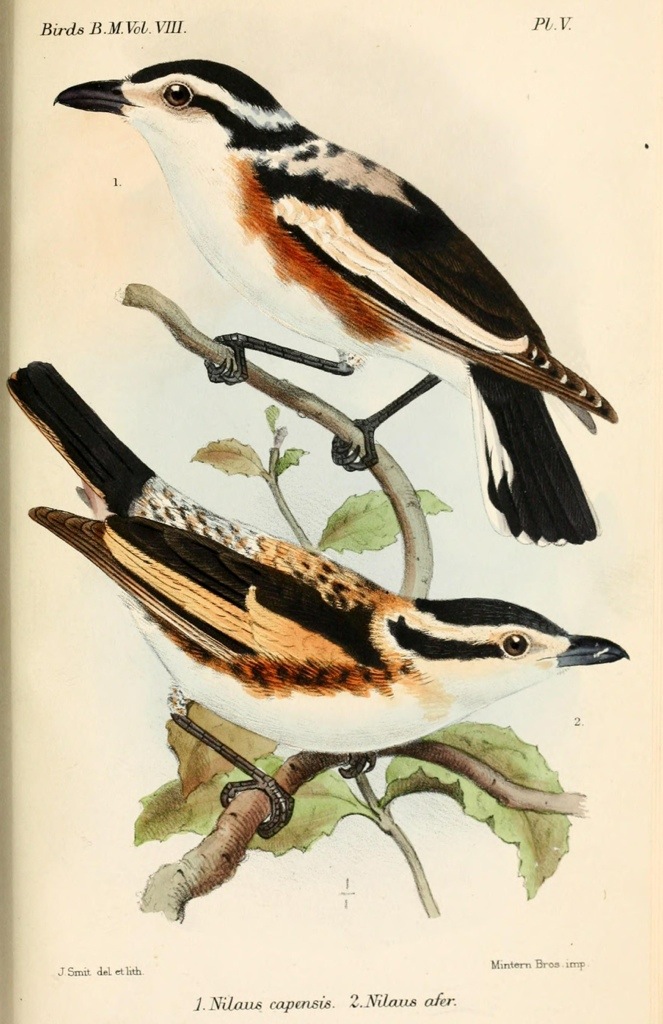 The king of the Birds promises a beautiful coat of feathers to any one who can get palm-nuts from the trees held by the Snakes. Young Brubru undertakes the task. He lights on a tree which is guarded by two Snakes. Turning to the right, he says to the first Snake, ” Don’t you know, my good friend, you are a relation of mine.” Turning to the left, he says to the second Snake, “And you, too, belong to our family.” From side to side Young Brubru turns, and speaks of his liking for snakes, and at each turn he picks a palm-nut.

Charmed by his words and manner, instead of attacking him, the snakes permit Young Brubru to carry off a large quantity of palm-nuts. On his return with such a big supply of food, he is hailed as the greatest member of the Bird tribe. Each bird plucks from its wing a feather, and of these a coat is made and given to Young Brubru. In this way he obtained the elegant coat he now wears. And in the Bird tribe it was first said, ” In time of war, strategy often proves more successful than fighting.