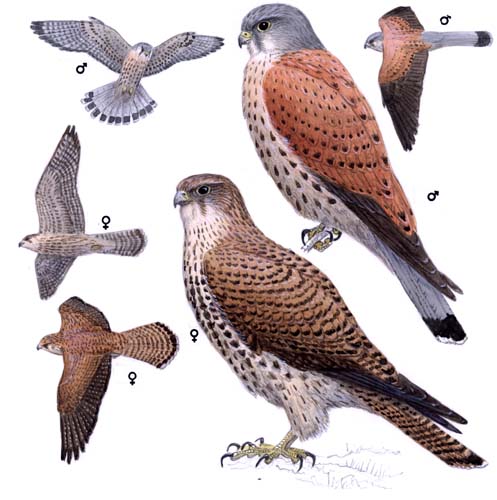 The Kestrel is a small, chestnut brown bird of prey that is frequently seen hovering over grassland. The hooked bill is a bluish colour with yellow cere. The legs are yellow. The male (or tercel) Kestrel has black-spotted chestnut brown upperparts, and a blue-grey head and tail. The tail has a single black bar at the tip. Underneath, the breast and belly are buff coloured with black spots. The female (or falcon) is darker than the male and the back, mantle and wings all have black barring. The tail has black barring along its length. The creamy underparts are more heavily streaked in black than the male. Occasionally, the head and tail may be tinged with grey. Juveniles are like females.

Listen to the sound of Kestrel

European populations are among the most urbanized raptor species and occur in a wide variety of habitats, including parks, orchards, small woodlands, gorges, and ravines. In Morocco, it occurs at inland and coastal cliffs and in towns, open forests, eucalyptus plantations, palm groves, cultivated areas, and semi-arid desert steppes. The southern African race (rupicolus) inhabits a wide variety of habitats from arid to mesic, but shows a particular preference for mountainous and hilly areas. Often perches on high cliffs, telephone poles, electric lines, electricity pylons for hunting. Occurs singly or in pairs, and not particularly wary of man.

Generally a solitary nester, but loose colonies of 5-50 nesting pairs occur in Morocco and Tunisia in very favorable habitat.
Kestrels use old nests of other birds or nest in holes in trees, cliff ledges or even man-made structures, such as motorway bridges. 3-5 eggs are laid around late April to May, with about two days between each egg. Incubation, done only by the female, takes 26-30 days. Once hatched, the chicks grow at a very fast rate. Food is fetched by the male and brought directly to the nest; or left close by, the male then calls to the female to get her to collect the food. The young are fully fledged in 4-5 weeks after hatching, but stay with the parents to be fed for up to 4 more weeks, before they have all their hunting skills, including the ability to hover.

Kestrels feed on small mammals, such as voles, shrews and mice, birds as large as Starlings, and invertebrates, such as beetles, grasshoppers and worms. In gardens, they will take meat scraps. In addition to having exceptionally good eyesight, Kestrels can also see ultra-violet light. This is useful in locating voles because they leave a trail of urine wherever they go and the urine glows in ultra-violet light.

This species has a large range, with an estimated global Extent of Occurrence of 10,000,000 km2. It has a large global population estimated to be 5,000,000 individuals (Ferguson-Lees et al. 2001). Global population trends have not been quantified, but populations appear to be stable (Ferguson-Lees et al. 2001) so the species is not believed to approach the thresholds for the population decline criterion of the IUCN Red List (i.e. declining more than 30% in ten years or three generations). For these reasons, the species is evaluated as Least Concern.
Falco tinnunculus is a widespread breeder across most of Europe, which accounts for
less than a quarter of its global breeding range. Its European breeding population is
large (>330,000 pairs), but underwent a moderate decline between 1970-1990.
Although trends were stable or increased in many countries during 1990-2000, key
populations in the United Kingdom, France and Russia declined, and the species
underwent a moderate decline (>10%) overall. Consequently, it is evaluated as
Declining.