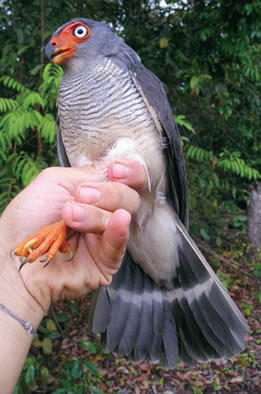 Described in 2002 (Wilson Bull. 114: 421-445), specimens of Micrastur mintoni had been overlooked as Lined Forest-falcon A. gilvicollis or confused with Plumbeous Forest-falcon M. plumbeus for over 100 years, despite the attention of such acutely observant commentators as Charles Hellmayr and Dean Amadon, until Andrew Whittaker finally resolved the mystery of short-tailed specimens of ‘M. gilvicollis’ from ParÃ¡, northern Brazil. The new species appears to have a disjunct range with separate populations through central and eastern Amazonian Brazil as far as northeasternmost Bolivia, which population principally occurs in humid terra firme, and the other in the eastern Brazil Atlantic rainforest, from northern EspÃ­rito Santo to southern Bahia, though the latter is speculated to be extinct. Whereas M. gilvicollis is principally restricted to localities north of the Amazon, Cryptic Forestfalcon has yet to be recorded north of the river and to the south they appear to be separated by the rio Madeira. The vocalisations (which proved to be initial key that unlocked recognition of the new species) and morphology of mintoni are distinct from all other forest-falcons. Like others of the genus, mintoni is a shy and often secretive bird that is rarely observed by chance. Apart from call, the main difference between the two species is the shorter tail and its patterning. Adult mintoni have one broad white central tail band, subadults have two broad white to buff bands. In contrast, adult and subadult gilvicollis have a longer tail with two distinctly narrower white tail bands, and immatures have two or three white to buff narrow bands. Other differences include mintoni’s more frequently contrasting dark forehead, crown and nape, slightly more extensive orange skin above the eye, bolder horizontal upper breast barring, less extensive lower underpart barring, and lack of a buff wash on the breast. Micrastur mintoni, from Brazil. Whittaker 2003 WilsonBull.(2002) 114 p.421,422
← Previous Post
Next Post →