Source to all birds on the Planet
admin
Coraciiformes, Momotidae, South America
Comments 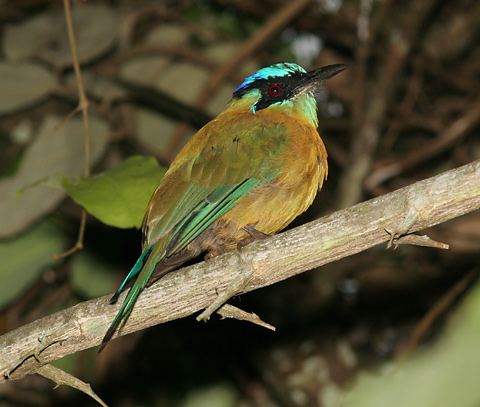 In plumage the sexes are indistinguishable. In both, the crown is black, bordered all around by a wide band of blue, which covers most of the forehead. The back and upper tail feathers vary in shade from olive-green to parrot-green. The wings are brighter green with bluish green primaries. Racket-shaped feathers are one of the characteristics that give tropical birds so exotic an aura. The two central feathers of the long tail, which are greenish near the end and bluer near the tip, extend far beyond the lateral rectrices, and near the end each has a short length of shaft from which the vanes have fallen, transforming it into a slender stalk that supports an isolated, blue, black-tipped, spatulate expanse of feather. The black bill is broad and heavy, with coarse serrations along the edge of the upper mandible in its middle half. The large eyes are dull red, and the short legs and feet are grey.

Preparation for reproduction begins months in advance, during the rainy season. Blue-crowned motmots usually choose less obvious sites, so that their burrows are difficult to discover. Instead of beginning its tunnel in an exposed soil surface, M. momota prefers to start from the side of some pit or hollow in the ground, such as the den of a burrowing animal, or a hole dug by man. The future parents gain two advantages by digging their burrows so early; the first advantage is the motmots find the soil soft and easily worked. Secondly, the burrow already looks old when laying begins, and is less likely to arouse the interest of predators. Eggs in various South American regions are laid between March and early April. In other areas in Mexico, egg laying is estimated to be between early May and late June. Both sexes incubate the eggs. The female usually incubates at night. Incubation periods vary in different regions, but usually last from 13 days to about 3 weeks. The motmot parents brood their undeveloped young for the first three to four days after hatching; thereafter, the parents simply feed them during the day and leave them unattended in the burrow at night.

Momotus momota are largely insectivorous, but they vary their diet and will consume fruits. Beetles appear to be their principal food source, and among other kinds they capture many dung-beetles. Other insects taken include large cicadas, phasmids or stick-insects, large green othopterans, and larvae of various kinds. Spiders and small lizards are also occasionally captured. The blue-crowned motmot has two ways of dealing with prey before it is consumed. One practice is taking the prey and beating it against the bird’s own perch until it becomes inactive, often until it is badly disfigured, before it is swallowed or carried to the young chicks. Other times the food is dispatched with while still on the ground. Occasionally birds accompany a swarm of army ants to catch the insects, spiders, lizards and other creatures which the ants drive from concealment in the ground foliage and make readily available to the foraging birds.