Source to all birds on the Planet
admin
Coraciidae, Coraciiformes, Eurasia
Comments 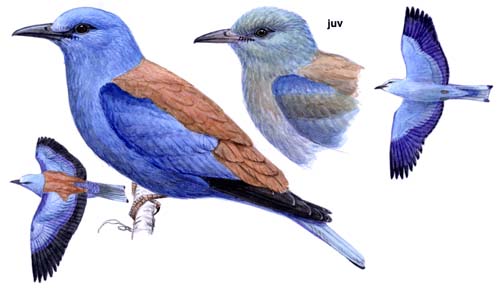 Listen to the sound of Roller

Diet mainly invertebrates: beetles and other hard-bodied insects, and some small vertebrates. Exceptionally, fruits such as grapes and figs eaten.
Many live scorpions taken, and species may be and accomplished scorpion predator. Several other prey items are distasteful: stink-grasshoppers and carabid, lampyrid and silphid beetles. Forages mostly from elevated perch, watching ground intently.

This species has apparently undergone moderately rapid declines across its global range and it is consequently considered Near Threatened. Declines have been most pronounced in northern populations, and if similar declines are observed elsewhere in the species’s range it may warrant uplisting to Vulnerable.

An intercontinental migrant, almost entire world population wintering in Africa South of Sahara. In autumn has occurred in great abundance in Algeria and Morocco, though only small numbers winter in West Africa; strong passage up Nile Valley and on West coast of Red Sea, also across Ethiopia, and in October-December through East Africa, especially Rift Valley; weak passage through Arabia. Winters mainly in East & South West Africa in Kenya, Tanzania, North East Botswana and East Namibia; present in October-April/May in South Africa, where prone to flock, evidently still moving South in November-December, and seen in South West Cape Province only in December-February. Congregates in East Tanzania from late March, and in early April up to hundreds of thousands travel in North in narrow corridor along East coastal lowlands to North East Somalia, in one of continent’s most spectacularly visible migrations, with thousands passing over a given locality in a few hours, e.g. 40,000-50,000 at Balad, Somalia, on single day in April. In Somalia, migrants fly 300-500 m above land, evenly spaced in column several Km wide, at ground speed of c. 48km/h; also common to abundant in Ethiopia in April. From Somalia birds emigrate at Cape Gardafui, with flocks seen from light aircraft arriving on Dhofar plain in South Oman, after sea crossing of 600 km, and many then cross a further 600 km of desert to reach Persian Gulf; singletons and loose flocks of 10-30 birds frequent in Oman from Mid-April to mid-May, often flying by day on broad front North or North East, or North West on Batinah coast. Recoveries of ringed birds suggest that they travel the 10,000 km from East Europe to Central Africa at c. 67 km/day, and return in spring 110 km/day.