Source to all birds on the Planet
admin
Alcedinidae, Coraciiformes, Eurasia
Comments 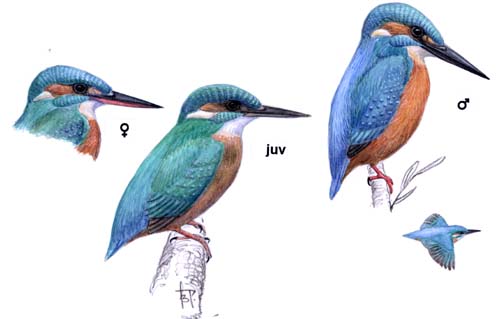 Listen to the sound of Kingfisher

Egg laying starts March-July in Britain, May in Sweden, March-May in Morocco and Iraq, March-June in India, March-August in Japan and in January in Papua.
Common Kingfishers are Monogamous, solitary breeders. The territory is defended by calling in flight and by displaying from perch, where it sits quietly, crouches and stretches, swaying body from side to side, bill agape and wings drooping, before chasing off and intruder.
Nest usually in sandy, stone-free streamside bank, quarry, sandpit, peat catting or earth bank, occasionally in hole in wall, rotten tree stump. Both sexes take part in the excavation which taking 1-2 weeks. The tunnel is straight and usually 50-100 cm long. Clutch size is 6-7 eggs, both sexes incubate during day, but only female at night for a period of 19-21 days. During extreme winters the species suffers grave losses. This kind of loss has been quickly bridged by several incubation periods, within a
year’s time.

Main diet based on fish, include roach, trout, roach grayling, barbel, carp and many other species. Also takes aquatic insects, also flies, butterflies, amphibians, crayfish, prawns, shrimps and isopods in winter. Very occasionally feeds on berries and stems of reed.
Perches for long periods, usually 1-2 m above the water, periodically turning around and bobbing head and body to gauge distance when food sighted. Dives steeply and catches prey below water to maximum depth of 1 m. Using its buoyancy and flapping the wings.

This species has a large range, with an estimated global Extent of Occurrence of 10,000,000 km2. It has a large global population, including an estimated 160,000-320,000 individuals in Europe (BirdLife International in prep.). Global population trends have not been quantified, but populations appear to be stable so the species is not believed to approach the thresholds for the population decline criterion of the IUCN Red List (i.e. declining more than 30% in ten years or three generations). For these reasons, the species is evaluated as Least Concern.

Northern populations, in areas where freezing conditions in winter, regularly migrates South, generally staying within species’ breeding range. Populations in Central Europe migrate in severe winters, and South populations (e.g. in Spain) are mainly sedentary. Distance moved varies, up to 250 km in Britain, 500 km in France and Belgium, 1500 km in Czechoslovakia, to 3000 km in Russia. Non-breeding birds present in North Africa September-April and in Sudan October-April. Migrates mainly at night and pronounced movements evident along Mediterranean shores. May form small flocks during migration. Wintering birds establish territories, and juveniles may stay together as pairs or groups.